India and the European Union on Monday decided to launch India-EU Trade and Technology Council.

The statement noted that this strategic coordination mechanism will allow both partners to tackle challenges at the nexus of trade, trusted technology and security, and thus deepen cooperation in these fields between the EU and India.

Both sides agreed that rapid changes in the geopolitical environment highlight the need for joint in-depth strategic engagement, the joint statement further said.

The Trade and Technology Council will provide the political steer and the necessary structure to operationalise political decisions, coordinate technical work, and report to the political level to ensure implementation and follow-up in areas that are important for the sustainable progress of European and Indian economies, it mentioned.

PM Modi, in his opening remarks, welcomed von der Leyen and thanked her especially because she made time for the Raisina Dialogue.

He pointed out that due to the prevailing conditions and the COVID-19 pandemic, the EU Commission President’s visit had to be rescheduled 2-3 times. PM Modi commended her commitment for visiting India.

Referring to the India-EU Virtual Summit was held, PM Modi said that it would have been better had they met in-person but due to the pandemic it could not be arranged. He hoped that the two sides would be able to hold it soon.

In her opening remarks, the EU Commission President said, “I am very happy visit India and to see you again, Prime Minister. It is the 60th anniversary of relations between the EU and India. Today, our relationship is more important than ever.”

“We have so much in common. We are vibrant democracies, we both support wholeheartedly the rules-based international order and we have both large economies, and we are both facing a challenging global landscape,” she added.

“For the European Union, the partnership with India is one of our most important relationships for the coming decade and strengthening this partnership is a priority,” von der Leyen said.

“And here, I am thinking of three main topics – trade, technology and security. That is why I am pleased that today Prime Minister Modi and I have agreed to establish an EU-India Trade and Technology Council,” she said.

“The EU has only one TTC so far – with the US, and I think it is telling that we now establish the second one with India. Also because India is technologically a powerhouse, and in the trade sector we need to unleash an enormous amount of untapped potential,” the EU President stated.

“I am also glad that we are starting negotiations towards comprehensive trade and investment agreements,” she added.

“And yesterday, on another important topic that we share – climate change – I spent an exciting day at the International Solar Alliance. Energy security is one of the most pressing topics for India as well as Europe,” von der Leyen mentioned.

“The EU will diversify away from fossil fuels and will invest heavily in clean renewable energy. Therefore, cooperation with India not only on solar but also on green hydrogen is critical,” she further stated. 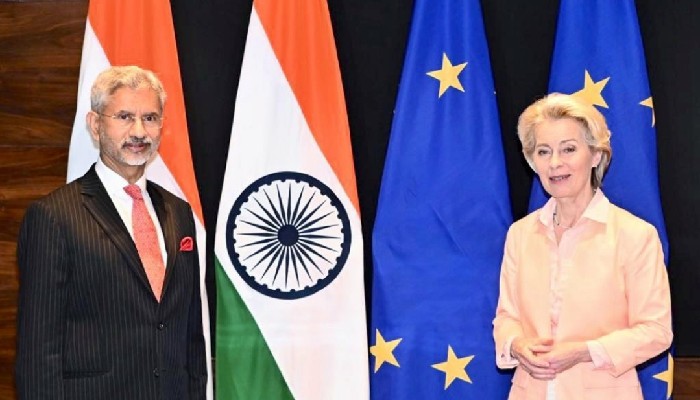