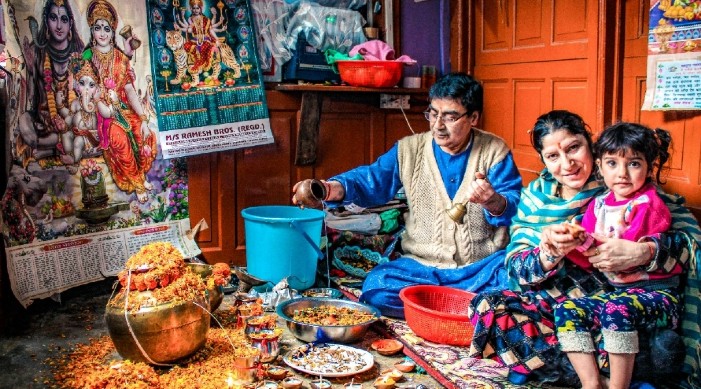 Maha Shivaratri is known as Herath in Jammu and Kashmir

When it rained in parts of Jammu and Kashmir on Monday, it brought a smile on the faces of Kashmiri Pandits.

They were celebrating Herath, as Maha Shivratri is known in Kashmir, and rainfall on this day has traditionally been considered auspicious. Many Kashmiri Pandits expressed the hope of lasting peace and change in the Valley.

Herath for Kashmiri Pandits is an elaborate festival which is celebrated with much fervour across the whole Jammu and Kashmir and Pandit communities living world over.

On this day, temples in Srinagar like Ganpatyar or Hanuman Temple remain abuzz with activities. Special pujas are conducted to mark the day.

"Kashmiri Pandits make the preparations a month before the onset of the festival," said Asha Koul, a local Pandit.

Preparing fish is a must among Pandits in Kashmir -- this is done to mark the wedding of Shiva and Parvati.

At Shankaracharya Temple, Srinagar, the biggest puja is held almost every year.

Kaul said that most of the Kashmiri Pandit families in Kashmir or from Kashmir follow the tradition of a 25-day celebration of Herath.

Veena Pandita, who has been living in Delhi for 30 years now, points out that she follows her family traditions religiously every year.

"For five days, an elaborate Shiva Shakti Puja is followed by all Kashmiri Pandit families which starts from Phalgun or Krishna Ekadashi to Phalguna or Krishna Amavasya," her mother-in-law added.

Walnuts form an important part of this festival, with Pandits distributing walnuts even among their Muslim brethren.

According to Sanjay Tickoo, a Kashmiri Pandit, Herath is observed for atleast three weeks. "We have a specific name for each day and a special religious function," he said.

Maha Shivaratri is a night devoted to worship of Lord Shiva, he added.

One this occasion, the Muslims visit their Pandit neighbourhood and greet them for the occassion. "It's always an overwhelming gesture when we get greeted and visited by our Muslim brethren," Tickoo said.

Veena remarked that though she lives outside Kashmir, her neigbours and friends from the Valley never fail to wish her through texts and calls.

Since fish is a important delicacy prepared on this ocassion, the Department of Fisheries make special arrangements on this day.

"We keep the fishes available fish at different places and kiosks so that Pandits in Kashmir don't face any issue in the procurement," said an official.

Also rainfall forms an important aspect of Shivratri in Kashmir.

"Rainfall on this occasion is believed to bring a good news and I have heard that on every Herath, it rains in the Valley," said Vicky, a young Kashmiri Pandit.