From Kashmir, a warm tale of communal harmony and brotherhood 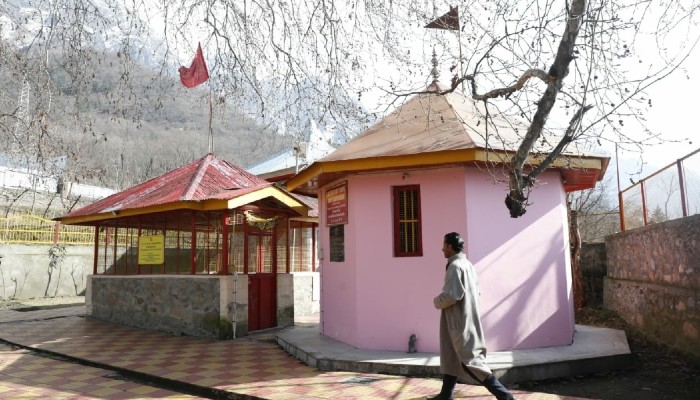 The Gopi Tirith temple in the Nishat area of Srinagar.

Kashmir is known for it's communal ties and brotherhood. Muslims are always keen to help their non-Muslim brethren and the same practice is being followed by Nisar Ahmad Alai for the past seven months

Amidst the beauty of Zabarwan hills in the Nishat area of Srinagar, falls a small ancient Shiva temple known as Gopi Tirith temple, which is taken care of by Alai.

Alai, 34, a specially abled person, took over this job from his father who had been taking care of the temple for six years.

Though Alai doesn't have the sense of sight and hearing, he has been dutifully fulfilling his responsibilities with passion and determination from July last year.

The temple's clean courtyard, proper interior sanctum, and the glowing images of Hindu deities reflect the sincerity of Nisar Ahmad Alai towards his work.

"This is not the first time that a Muslim has been serving as the caretaker of this temple," said Manzoor Ahmad Lone, an area resident.

Muslims have been taking care of this temple for the last 19 years. Alai's father was associated with the temple for more than six years, Alai for a year, then his neighbour Abdul Ghaffar for more than three years and now again Alai is in charge.

Not only is he responsible for the protection of the temple, but this 9th class pass-out also loves to grow vegetables in the temple courtyard.

"Whatever produce he gets, that's being distributed among the locals," said Gaffar.

He further said that the locals do not stop anyone from serving this temple as they believe in mutual brotherhood.

"For its maintenance, Alai gets a salary of Rs 8000 from Ishwar Ashram Trust, a religious institution that oversees the temple and he is quite content with it," Gaffar added.

It's important to mention here that the temple was renovated by Samikik Vikas Sanstha in 2014 after being deserted for long.

"Since then local Muslims are taking care of it officially," Gaffar remarked.