Arif Khan leaves for Beijing, aims to make a mark at 2022 Winter Games 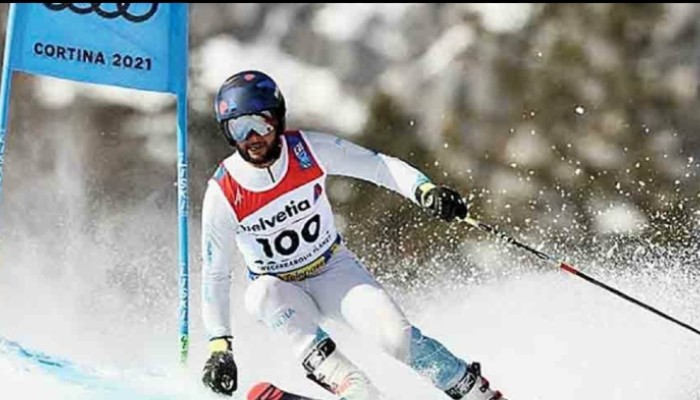 Mohammad Arif Khan, India's lone athlete for the 2022 Winter Olympics,
has left to represent India at the competition being held in the Chinese capital city of Beijing from February 4.

The Alpine skier from the Tangmarg area of ​​North Kashmir's Baramullah district hopes to make a Top 30 finish at the competition.

Khan, who had earlier qualified for the Winter Olympics in two events - Slalom and Giant Slalom, had come back to Kashmir for a few days after completing 35 days of training in Austria.

He had been approved an amount of Rs 17.46 Lakh under TOPS towards training in Europe and procurement of equipment, ahead of the grand event in China.

He spent these days with his parents and family, but he was strictly adhering to the guidelines issued by the Olympic Committee in view of the pandemic and was in isolation initially.

During his communication with this INN reporter, he said that he is all set for the competition and expects to make the country proud.

He also spoke at a virtual media interaction facilitated by the Sports Authority of India (SAI) during which he spoke about his physical and mental endurance in length.

"Physically, I am totally ready for the Games. A week ago when I was in Gulmarg, I did high altitude training and built up my muscles, lungs and endurance." he said.

He also spoke about mental strength which is important to keep an athlete into the game.

"One needs to be calm and focused because even a minor mistake can have big repercussions. During my training sessions, I have been trained very well by by mental conditioning coaches and I am as ready both mentally as well as physically," Khan explained.

During his interaction with INN, he said that his practice sessions have seen a sea of change.

"There is a big difference between practicing here before qualifying for the Olympics and practicing now. People are more respectful towards me now and meet me with different ideas and concepts," he said.

Giving credit to his hardwork and training sessions in Europe, he said the interest of young athletes in skiing in the country, particularly in Jammu and Kashmir, has also increased which was a matter of happiness and pride for him.

He further added that he loves to share his experiences with new players when they come to meet him.

While expressing his desire about greater participation in the Olympics, he said, "I want more and more people from Jammu and Kashmir to qualify for Olympics to represent country and UT in the world over."

Khan believes Kashmir has got everything that a player needs to qualify for such games. "There is no dearth of talent here but it only needs to be honed," he observed.

It's pertinent to mention here that Arif Khan won two gold medals in the Slalom and Giant Slalom competitions at the last South Asian Winter Games.

So far, he has represented India in more than 100 ski events held across the world.