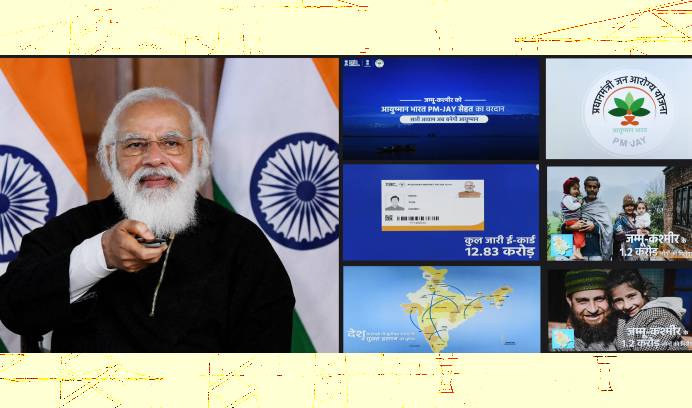 Congratulating people of Jammu and Kashmir for strengthening democracy, Prime Minister Narendra Modi on Saturday said, the election of the District Development Council has written a new chapter.

Taking a dig at the opposition party, he said despite the Supreme Court's order in Puducherry, panchayat and municipal elections are not happening even as the tenure of those elected has ended in the year 2011.

He added another benefit of this scheme would be that treatment is not limited to government and private hospitals in Jammu and Kashmir only. Rather, treatment can be availed from thousands of hospitals empanelled under this scheme in the country.

The Prime Minister termed the extension of the coverage of Ayushman Yojna to all the residents as historic and expressed happiness seeing Jammu and Kashmir take these steps for the development of its people.

He said the development of the people of Jammu and Kashmir is one of the biggest priorities of his government.

“Whether it is about women empowerment, opportunities for the youth, upliftment of the dalits, exploited and deprived or it is the question of the constitutional and fundamental rights of the people, our government is taking decisions for the welfare of the people”, the Prime Minister added.

Highlighting welfare schemes extended to the residents of Jammu and Kashmir, the Prime Minister said during the pandemic about 18 lakh LPG cylinders were refilled in the Union Territory. More than 10 lakh toilets were built in Jammu and Kashmir under the Swachh Bharat Abhiyan. Its purpose is not limited to just building toilets, it is also an attempt to improve people's health.

Along with the rural road connectivity, efforts are on for providing piped water to every household in Jammu and Kashmir within next 2-3 years, the Prime Minister said.

The Prime Minister said the youths of Jammu and Kashmir are easily getting loans and moving on the path of peace. The people who are living in Jammu and Kashmir for many years are now getting domicile certificates. People of economically weaker sections in general category are getting reservation now so are the hill dwellers and people living in border areas.