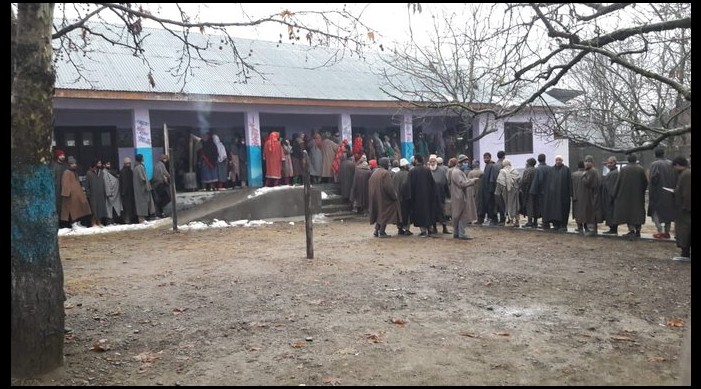 Glimpse of voters standing in queue before a polling station in Kashmir (source: twitter@diprjk)

Polling in the sixth phase of District Development Council (DDC) in the Union Territory of Jammu and Kashmir came to an end on Sunday with around 42.79 per cent voter turnout till 1 PM.

Similarly, in Jammu division, Rajouri recorded 63.07 per cent, the highest in the division followed by 61.91 per cent of Ramban and 61.21 per cent of Reasi.

Due to the COVID-19 pandemic situation, the voting was held with all safety arrangements in place. The administration set up around 2,071 polling stations including 1208 in Kashmir division and 863 in Jammu division, in the sixth phase.

Phase five of the DDC elections was held on December 10 on 37 constituencies including 17 in Kashmir division and 20 in Jammu division with around 51 per cent of voter turnout being recorded across the union territory.