Centre launches 23 road and bridge projects in Jammu and Kashmir 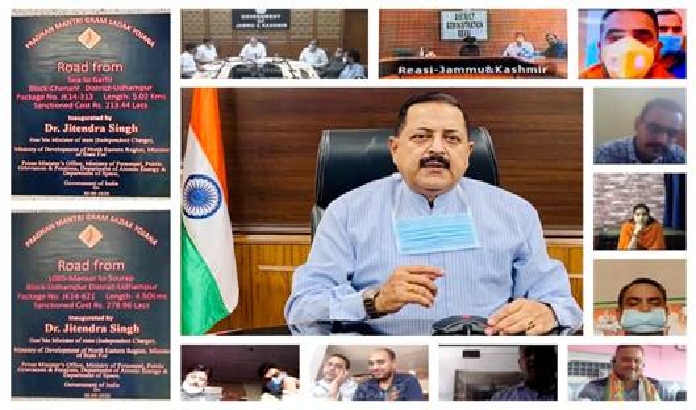 These included 15 roads and 8 bridges, thereby providing people with all weather connectivity projects in the region

Giving boost to infrastructure development in the Union Territory of Jammu and Kashmir, the Centre on Wednesday launched 23 road and bridge projects in Kathua, Doda, Udhampur and Reasi districts of the region.

“Projects costing about Rs 73 Crore and having length of 111 kilometers will benefit more than 35,000 people in the region,” Union Minister of State (Independent Charge), Jitendra Singh said.

While e-inaugurating these projects, Union Minister Jitendra Singh said that despite serious challenges posed by the Covid19 pandemic in the last few months, barring few, all the projects were completed within stipulated time frame.

He emphasized that despite challenges posed by pandemic, the country had not compromised with the pace of development and particularly the UT of Jammu and Kashmir. He was informed that 1150-km of roads built in this fiscal till date in comparison to 800 km last year.

Jitendra Singh said that in the last 6 years of the Modi government, the work culture has undergone a sea change and projects were being cleared on need based requirements, rather than on any other considerations.

He said allocation of nearly 2/3rd of PMGSY funds for the hilly and inhospitable terrain of Udhampur, Kathua and Doda is testimony of this.

Jitendra Singh reiterated that Prime Minister Narendra Modi has emphasised upon all to dedicate completed development projects to people of the country without waiting for its formal inauguration.

He said the government gave primacy to people’s needs and that people should not face difficulties of any kind for the sake of formal inauguration of various developmental projects.

He said that the government was steadfast and committed in completing all the projects that have started in the last six years in a time bound manner notwithstanding various hurdles like the Covid19 crisis.

Giving an insight into the various development projects constructed in district Reasi, Jitendra Singh said that the highest railway bridge in the world was being constructed in Reasi district that was 35 meters taller than the Eiffel tower in Paris, France.

Jitendra Singh asked officials to adhere to the timeline and also fast track the land acquisition and forest clearance on priority basis so that developmental works continue unhindered.