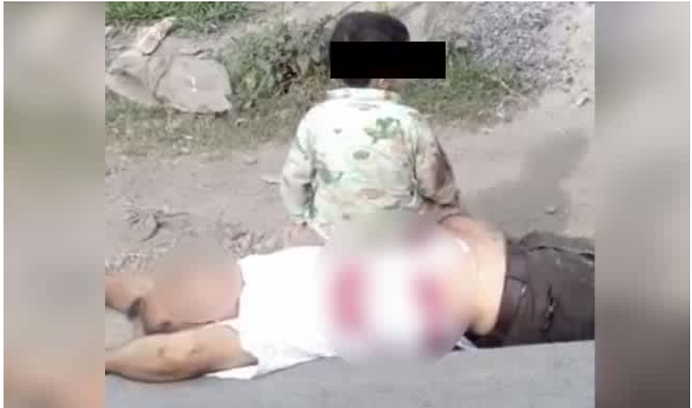 The child with his dead grandfather before being rescued by the police. (Source: Twitter)

The barbarism of Pakistan-backed terrorists was on display yet again as they killed an elderly man in the presence of his three-year-old grandson in Jammu and Kashmir’s Sopore town on Wednesday.

The man, later identified as a civilian on his way from Srinagar to Handwara with his grandson, was killed when terrorists opened fire on personnel of the Central Reserve Police Force (CRPF). Multiple images and videos show the child sitting numb, beside his grandfather’s body.

He was soon in the safe hands of a J&K Police personnel, who took him to safety while holding and consoling him in his lap. Subsequent photographs showed him sitting in what appeared to be a police jeep, with tears in his eyes and visibly stunned by what had just happened. A video circulating in social media showed the child sobbing while being taken home by the police. 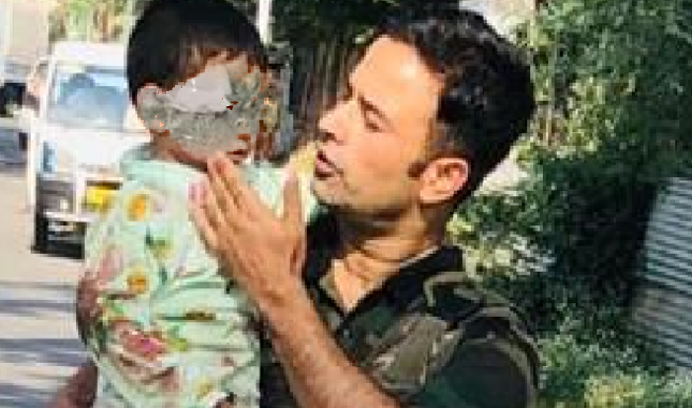 A policeman carries the child to safety. (Source: Twitter)

There was an outpouring of anger and anguish at what the child had to go through, with people using the hashtag #HumanityOverPakTerror on Twitter. Union Minister of Railways and Commerce & Industry Piyush Goyal was among those who condemned the attack on Twitter.

“Heartbreaking to see the brutality of Pakistan sponsored terrorism on civilians in Kashmir valley.

Unequivocally condemn this barbaric act of killing an elderly man in front of his grandson. Our brave Armed Forces saved the little boy just in time. #HumanityOverPakTerror,” Goyal tweeted.

Some attempts were made on social media to pin the blame on the security forces. This was promptly refuted by the police.

“The news surfaced on some social networking sites that the civilian was brought down and killed is totally baseless and is far beyond the facts, Sopore Police refutes and denies the news and legal action shall be initiated against the false reports and rumours,” the official handle of Sopore Police said on Twitter.

A Twitter handle by the name of @TranquilLqd later shared a screenshot of what is alleged to be a chat on the micro-blogging platform, with instructions apparently being sent out to build a narrative that the CRPF shot the civilian. “Don’t let them put the blame on militants,” one of the messages in the alleged chat reads. (India Vs Disinformation could not independently verify the authenticity of this post.)

According to the Jammu and Kashmir Police, the terrorists were hiding in a mosque and began firing indiscriminately when a CRPF contingent was getting off a bus. The CRPF troops retaliated but the terrorists managed to escape.

The area was cordoned off and a search operation was launched by the security forces.