First outsider from Jammu and Kashmir gets UT domicile certificate 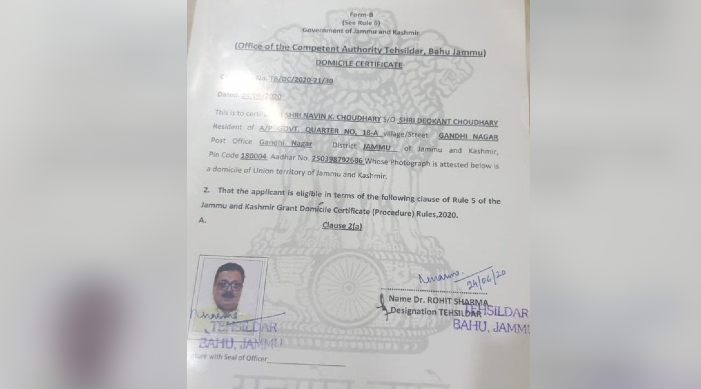 In a move that could set a precedent in Jammu and Kashmir’s political history, Naveen Kumar Choudhary, a senior IAS officer who is working as Principal Secretary in Animal and Sheep Husbandry department of the Union Territory, has become the first individual outside the region to become its domicile. Naveen Kumar Choudhary hails from Bihar’s Darbhanga district.

According to Indian Express, this domicile certificate was issued to the senior IAS officer by the tehsildar of Jammu district’s Bahu area on Wednesday.

A 1994-batch Jammu and Kashmir cadre IAS officer, Naveen Choudhary has been serving in the region for 26 years.

Post removal of Article 370, the Centre has done away with laws which were earlier creating hindrances in the way of overall development of Jammu and Kashmir. The contentious article was working as a façade to sustain practices, which were otherwise anti-thesis to India’s democratic character. Purchasing land or owning any property in Jammu and Kashmir by outsiders was not possible.

Therefore, while doing away with such anomalies, India, through new rules, wants to infuse a fresh life and dynamism in the Union Territory. But at present, only those individuals are entitled to domicile certificates in Jammu and Kashmir who are in the job of the UT administration or studying in professional colleges run by it.