Killing of Ajay Pandita: An abandoned house and grieving neighbours 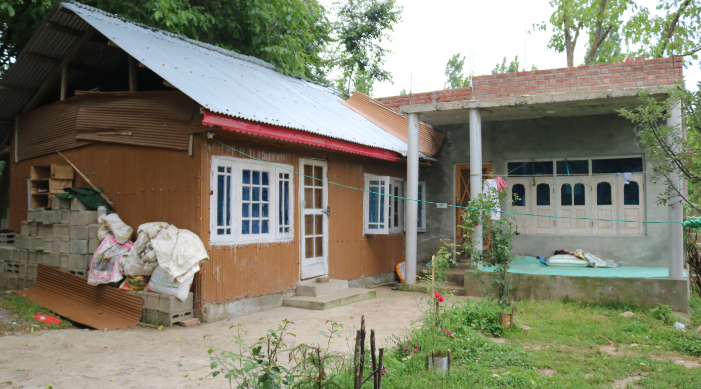 The bereaved family of Pandita left everything behind in their ancestral place, only to shoulder their son’s body for cremation in Jammu

There is an eerie calm in the small locality of around 15 families of Marg Mohalla in Larkipora, Anantnag. No one easily talks of the brutal tragedy that struck a Pandit family here just a few days ago. The locals are silently mourning though, the grief and fear clearly visible on their faces.

“No, no, nobody was killed here,” a local youth told this writer and quickly moved away as I descended through the narrow lane of this mohalla lined with lush green apple trees.

It takes a little time to win the trust of neighbors of Ajay Pandita (Bharti) to open up and share what happened last Monday.

Bharti, a local Kashmiri Pandit sarpanch, was brutally murdered by terrorists outside his home in the evening of that fateful day. The killing triggered massive panic and his neighbours are yet to accept the reality that Pandita is no more among them.

“He was like my son and would treat my daughters like his own sisters,” an old woman shrieks outside her home. “The tragedy has befallen not only to the family of Omkar Nath, father of the slain sarpanch, we all mourn his death.”

According to locals, some masked men whisked Pandita away from a nearby shop on the pretext of seeking his help.

Whenever he was home, Pandita would go and stay with his local Muslim friends at this shop.

“On Monday evening at around 5 p.m. some masked youths came up and asked him to accompany them to a nearby orchard and brutally shot him dead,” says one of his friends.

Lokbhawan is a small village that had around 300 Pandit families living there till the 1990s. When the Pandits were forced to migrate to Jammu and other parts of India after Pakistan-backed terrorism struck the valley, the village witnessed mass migration overnight. The indigenous Kashmiri populace turned refugees in mainland India and Lokbhawan in Kashmir presented a ghost look.

Pandita’s family had also migrated, but in 1996-97 even before the situation in Kashmir had politically improved and the Government of India facilitated the return of migrants, Pandita’s family was the first and only in the village to return.

When Pandita returned with his family, locals say, he first decided to construct his house at his ancestral place. “But since all his Muslim neighbours had shifted to the nearby Marg mohalla from the over-congested Lokbhawan, Pandita also decided to move to live among his old neighbors,” an elderly person from his neighborhood said.

“The father of Pandita had already constructed the plinth at his ancestral place but he left it abandoned only for the sake of keeping centuries’ old tradition of brotherhood and harmony alive,” he said. 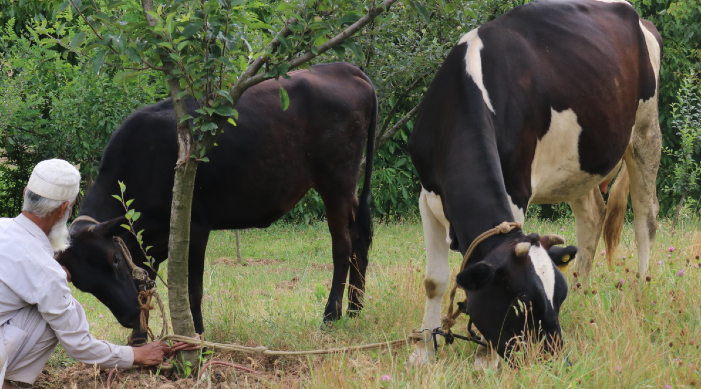 The family’s two cows are now taken care of by a neighbour. (Photo: Shahzaib Khan)

Surrounded by his Muslim neighbours, Pandita built a two room partially concrete house in his apple orchard, where he had been living with his family and parents since over ten years now.

The village is shaken by Pandita’s murder. Locals say they have never seen such an attack in the three decades of turmoil. “I remember one local Pandit man being killed in the 1990s but that was 20 kilometers away in Qazigund. Notwithstanding the worst of times in the last three decades, we managed to retain and sustain the harmony here,” said one of his neighbours.

“Whosoever is behind this heinous crime is actually the one who wants to disrupt peace and harmony here. But we defeat those designs and stand by our Pandit brethren,” he said.

Pandita is survived by two daughters and wife besides his old parents. His was among the very few Pandit families who had permanently resettled in Kashmir after their mass migration.

“They would shift to Jammu for just two months of winter. Rest of the year they would stay here, spend time farming and rebuilding their lives.”

“Pandita was an intellectual during serious discussions, a jolly man when surrounded by the neighboring kids and a social worker when needed the most in our mohalla,” a neighbor remembers him.

The orchard where the victim had built the small house was regaining its glory following the care he had begun to take. The victim’s family had purchased two cows and constructed a tin shed to shelter them in front of his house.

A long kitchen garden on the other side of the house had almost all the vegetable saplings planted by the family, indicating how hard the family was trying to revive its glorious past.

All is now left abandoned following his murder. Windows of the house are open. A peep inside the house shows the lights are still on, plates lying scattered with remnants of food. Clothes are hanging on the walls. It’s clear by the look of things that the family left the premises suddenly, without a second thought.

The bereaved family left everything behind, only to shoulder the heaviest load of their life – their dead son’s body for cremation in Jammu.

The family’s two cows are now taken care by a neighbour who hopes someday the Pandita’s family will return and take care of their assets.

Few years ago, when the Narendra Modi government decided to strengthen grassroots democracy in the then Jammu and Kashmir state, panchayat elections were announced. The announcement was followed by threats from terrorists. The then dreaded terrorist Riyaz Naikoo (recently eliminated by security forces) had warned that all those who participated should keep their coffins ready. Very few locals had dared defy the terrorist threats. Ajay Pandita Bharti was amongst those who did.

He decided to contest the elections and joined the Congress party. Despite the region being a hot bed of terrorism, Pandita worked day and night to strengthen the roots of democracy and tried to instill faith in the democratic structure of the country.

“If we are not going to restore the institutions of public welfare today, who else will come here to work for us. We need to work for ourselves, our children and for the larger good of our society,” a friend remembers what Pandita said when he decided to contest.

Pandita, however, was keenly aware of the threat to his life from the beginning. In a video interview that surfaced on social media after his death, he can be heard insisting that the government provide security cover to all Sarpanchs in the valley.

“Whatever is being spoken in media by the centre government, the situation on ground is quite contrary. I being the Sarpanch is feeling helpless as we have no security to protect our lives,” he can be heard saying in an interview.

However, the persistent threats never undermined the will of Pandita. His vision for the society can easily be gauged by some of the developmental projects undertaken in his locality.

He was actively working to ensure that the people of his area got the benefit of various government schemes. “He had even assured me to get my case approved for building my house under the Prime minister Awaas Yojana,” one of the locals remembers wistfully.

Altaf Thakur, state spokesperson for the BJP, says Pakistan-backed terrorists are trying to revive the gun culture of the 1990s. “It is an effort to ensure no Pandit brethren returns to his native Kashmir. They want radical wahabi ideology to flourish and Pandita was the victim of the same ideology,” he says. “Such heinous crimes had forced the community to leave their land in the 1990s. Now that the situation is getting normal and Pandits are gradually returning, they are resorting to the same tactics”.

Pradesh Congress President Ghulam Ahmad Mir, however, blames the BJP for not providing him with security. Mir said he was denied security because of his affiliation with the Congress.

Killing of Sarpanchs in Kashmir

Nearly 70 Sarpanchs have been killed in the past several years across Kashmir, but Pandita’s case has to be seen in a different context. He is the first Sarpanch and a Pandit who was killed by terrorists post abrogation of Article 370 on August 5, 2019.

Security agencies consider it as a tactical killing to discourage the larger plans of resettling migrants and inviting investments into Kashmir.

“Terrorists are on the back foot due to intensified counter insurgency operations in the Valley. As they cannot fight head on, they resort to tactical killings,” says a senior Army official, wishing not to be named. “In the past killings, the aim was to demoralize the electoral process only.”

Interestingly, it took three days for terror group Hizb-ul Mujahideen to condemn the killing of Pandita.

Lieutenant Governor Girish Chandra Murmu met the family of the Sarpanch and extended his deepest sympathies to them. While paying homage to Ajay Pandita, Murmu said the supreme sacrifice made by him would always be remembered and hoped that perpetrators of such dastardly acts would realize their follies and desist from committing crime against humanity.

Assuring full support from the Union Territory (UT) Government, the Lt Governor handed over the ex-gratia relief to the next of kins of the martyred Sarpanch. The relief amounting to Rs 20 lakh includes Rs 5 lakh from SRE, Rs 1 lakh as ex-gratia from Government, Rs 4 lakh from Lt Governor Relief Fund, whereas Rs 10 lakh out of Panchayat Welfare Fund will be released shortly.

(Names of Ajay Pandita Bharti’s neighbours who spoke to this writer have been withheld on request for security reasons.)

The writer is a Kashmir-based research scholar.