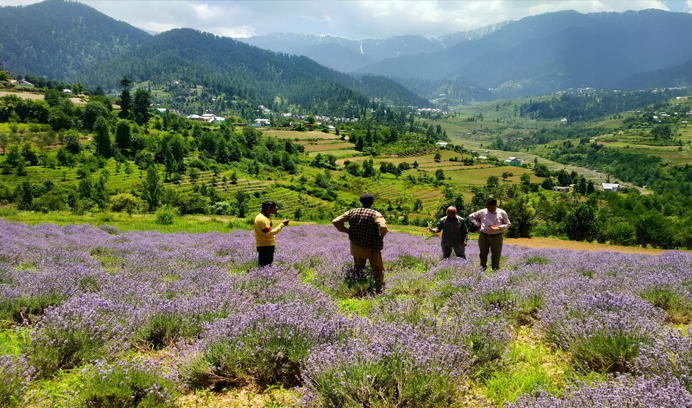 Farmers in Doda are on the path of fulfilling Prime Minister Narendra Modi’s dream of ‘Atmanirbhar Bharat’.

More than 200 progressive farmers residing in the vast hilly slopes of Doda have successfully embraced aromatic lavender cultivation that is comparatively more profitable, thereby, starting a “purple revolution” in the district.

Tipri (Bhaderwah): Giving up the age-old traditional farming of maize crops, 200 progressive farmers residing in the vast hilly slopes of Doda have successfully embraced aromatic lavender cultivation that is comparatively more profitable, thereby, starting a “purple revolution” in the district.

The farmers, who are growing lavender under the Union Government’s Aroma Mission, said that by adopting farming of unconventional aromatic plants, they are on the path of fulfilling Prime Minister Narendra Modi’s dream of ‘Atmanirbhar Bharat’.

To increase the income of small and marginal farmers with primary focus of research on drug discovery from natural products, the Council of Scientific and Industrial Research (CSIR) initiated Aroma Mission to popularise aromatic crops and provide end-to-end technology and value-addition solutions to farmers across the country.

A native crop of Europe, lavender was introduced by Indian Institute of Integrative Medicine in the temperate regions of the Jammu division under CSIR-Aroma Mission in 2018 and tried to popularise it in Doda, Kishtwar, and Rajouri districts.

Besides giving them technical support, free essential oil distillation facilities were provided to the farmers of Bhadarwah and through CSIR-IIIM interventions, they have produced more than 800 litres of lavender oil worth Rs 80 lakh from 2018 to 2020, he said.

After the Ministry of Science and Technology’s initiative which has started paying rich dividends to small farmers, Gairola said local entrepreneurs have also started encouraging lavender producers by providing them the required infrastructure at their doorsteps to extract oil and the appropriate market to sell it.

“We have been encouraging farmers of Bhaderwah since 2010 to adopt cultivation of aromatic plants, keeping in view economic, infrastructure, and conceptual need. We have installed five distillation columns in different villages of Bhadarwah beside providing them access to sell their produce in the international market,” proprietor of Natural Essential Oils, Touqeer Bagban, said.

He said over 100 acres of land belonging to 200 farmers have been brought under cultivation of aromatic plants especially lavender.

“We are working hand in hand with IIIM-CSIR Jammu supporting production of aromatic products to fulfill the Prime Minister’s view of Atma Nirbhar Bharat,” Bagban added.

He said farmers have already started harvesting and distillation of lavender in Bhadarwah. “Due to favourable weather and timely rains, they are having a bumper crop and expecting good return as the cost of lavender oil is Rs 10,000 per litre,” he said.

Sarpanch Neota-Karyan Om Raj said the farmers were initially a bit apprehensive as they have been growing maize for generations.

“Today, I feel proud of my decision of adopting lavender farming as my income has grown 100 times. Now, not only me but all my fellow villagers have switched from maize to lavender farming,” he said.

Several women who switched over to lavender farming are a happier lot as well as they spend very little time in the fields and can utilise their time in other activities.

“Lavender farming turned out to be a purple revolution for us, as for women, it means investing less effort and making more money. Now, we can give extra time to our children and they can concentrate more on their studies,” local resident Babli Devi said.

Having an incredibly aromatic smell, lavender flowers have a soothing scent featured in a variety of merchandise, which provides a range of profitable outlets for small-scale producers.

Unlike many other seasonal crops, producers can dry lavender for ornamental flower arrangements, wands, sachets or potpourri, or transform the dried flowers into value-added products such as essential oils, tinctures, soaps or lotions. It’s also useful in baking and makes tasty honey, according to experts.