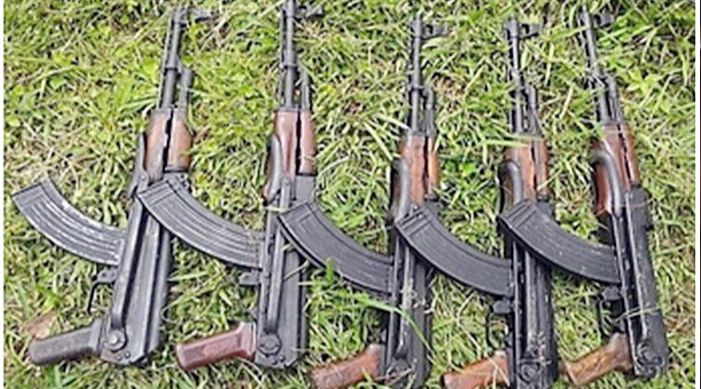 There has also been a rise in the Pakistan-originating Chinese drones dropping weapons and communication devices in Punjab following the abrogation of Article 370 on August 5, last year

Since the global watchdog on terror funding, Financial Action Task Force (FATF) mounted pressure against the Imran Khan government, terror groups based in Pakistan have been smuggling weapons for their recruits in Kashmir via Punjab.

Top official sources said that since the February 2019 Pulwama suicide attack, dozens of weapons enroute Jammu and Kashmir, have been seized in Punjab. There has also been a rise in the Pakistan-originating Chinese drones dropping weapons and communication devices in Punjab following the abrogation of Jammu and Kashmir''s special status on August 5, last year.

"We have seized 15 AK-47s, 10 in Punjab in two separate cases and five at Lakhanpur border between Punjab and Jammu. Besides, we have also recovered dozens of pistols, ammunition, satellite phones, fake Indian currency notes (FICN) and hand grenades from these drone sorties in separate incidents since August, 2019," a top source said, adding that there may have been many occasions when the security forces were unable to intercept and seize the Pakistani arms consignment.
An official who did not want to be named said that the usage of drones for dropping arms was "scary" because Pakistan can smuggle anything from biological to chemical weapons into India using unmanned vehicles.

Earlier, terrorists were mostly infiltrating from the Line of Control (LoC) in Jammu & Kashmir and would bring large consignment of arms along. The LoC trade was another route for smuggling arms into Kashmir.

But after the NIA cracked down on terror groups and their support system in Kashmir and FATF tightened its noose around Pakistan, the strategy of banned terror groups like Jaish-e-Mohammad, Lashkar-e-Taiba and Hizbul Mujahideen has changed, a source said.

"Given the scrutiny and conditions that Pakistani establishment is supposed to meet to get off the FATF''s ''grey list'', they are now using alternative routes for cross-border terror," another source said.

In the last one year, officials said, the ISI -- the sponsor of terror groups in Pakistan -- has also pumped their resources into reactivation of their global Khalistan network too. Pakistan''s spy agency ISI has been funding Sikh separatism (Khalistan) in Punjab and Muslim separatism Kashmir for last several decades.

Investigations have revealed that they were successful in recruiting dozens of militants to carry out terror attacks in India, an NIA statement said. Nine people have already been arrested from Punjab in the case.

The usage of drones for arms trafficking and smuggling came to light after the discovery of the burnt drone, whose eight Chinese batteries were stripped off by the accused on the instructions from their handlers across the border, sources said.

FATF (Financial Action Task Force), a global watchdog on terror funding and money laundering, had placed Pakistan in ''grey list'' in June 2018, requiring it to crackdown on terror groups and their finances by October 2019. Failure to comply poses the risk of being placed on the Black List along with Iran and North Korea, which can adversely impact a country''s trade and investment. The Imran Khan government expects to exit the FATF grey list with the help of China, Turkey and Malaysia in the February 16 meeting.