27th Annual Football Championship to begin in Kashmir from tomorrow 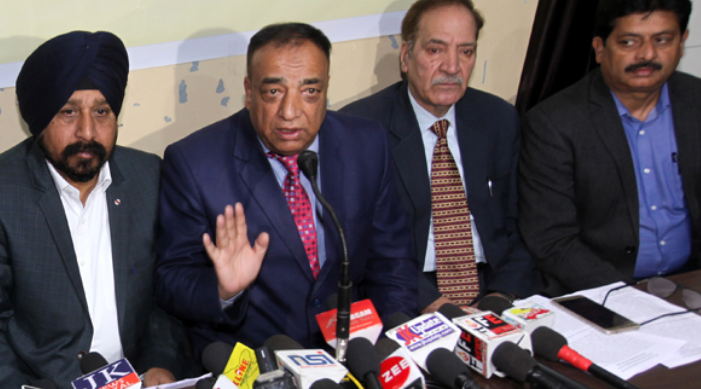 The members said that Arun Kumar Mehta, Financial Commissioner will inaugurate the Championship on February 12 at Mini Stadium Parade

As an annual feature, the Jammu and Kashmir Football Association (JKFA) will be organising 27th edition of the Annual Football Championship from February 12 at GGM Science College Football ground and Mini Stadium Parade, here.

This was stated by Zamir Thakur, President Jammu and Kashmir Football Association while addressing media persons at Press Club, today.

He was accompanied by other office bearers of the Association.

He said top teams drawn from 20 districts and six zones, besides 5 Departmental teams and 3 I-League teams will take part in the Championship.

Mr Thakur also threw light on the achievements of the Association during last few years.

He said apart from hosting prestigious Santosh Trophy in Jammu and Srinagar earlier, the JKFA also organised Goodwill Football matches at Srinagar, Baramulla and Jammu in which top Clubs of the country including Mohan Bagan, Mohammedan Sporting Club and likes took part, adding that 73rd Santosh Trophy of North Zone was also organised by the Association at SMVDSB, Katra.

“The Association has also the honour to raise two I-League Football Club namely Lone Star Kashmir FC and Real Kashmir, which are doing well at the national scene,” Thakur said.

The members said that Arun Kumar Mehta, Financial Commissioner Finance will inaugurate the Championship on February 12 at 11:30 am at Mini Stadium Parade.

Other members of the Association, who were part of the Press Conference were Surinder Singh Bunty, Prof Bashir Ahmed and Narinder Gupta.