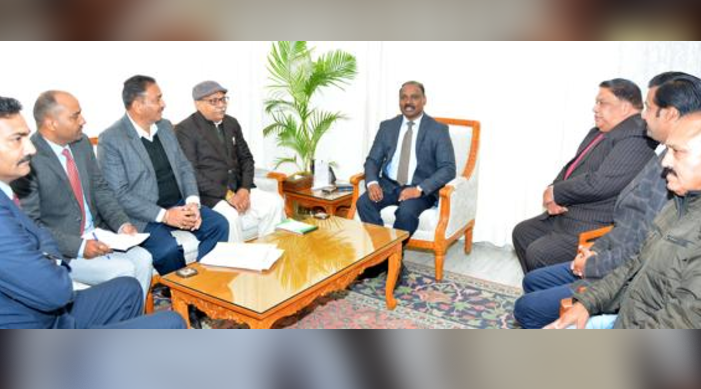 The delegation led by its President Vijay Thakur comprising of its members-Rajan Gupta, Amar Goyal, Vijay Mehra, Harsh Rishi, Pankaj Soni and Tirlok Oberoi sought Lt Governor’s intervention in various issues pertaining to the pilgrims of Shri Amarnath Yatra and the Bhandaras organizations serving during the holy Yatra including reduction in the duration of the Yatra period, security and safety of Sewadars, night shelters to pilgrims, cloakrooms at higher altitude, storage of Bhandara materials, increase in registration counters, simplification of several procedures etc. They also extended their full cooperation towards maintaining a clean environment enroute.

The Lt Governor gave a patient hearing to the issues projected by the members of the delegation and assured them of necessary measures for providing requisite facilities for the pilgrims and service providers for the smooth conduct of Shri Amarnath Yatra.

A delegation of the Jammu and Kashmir Sharnarthi Action Committee (JKSAC) led by its President Gurdev Singh projected the demands related to the settlement of Displaced Persons (DPs) of 1947 from PoJK and also raised several welfare issues of the DPs.

Meanwhile, Shoaib Nabi Lone, ex-MLA called on the Lt Governor and apprised him about various issues of public importance of Sangrama constituency of Baramulla including strengthening of road network, power supply, education and health facilities.

The Lt Governor observed that the present Government is making committed efforts to resolve the grievances of the people of J&K, besides fulfilling their developmental aspirations. He assured the delegations and the former Legislator to review the genuine issues and demands projected by them for their early redressal and urged them to continue working towards promoting public welfare.