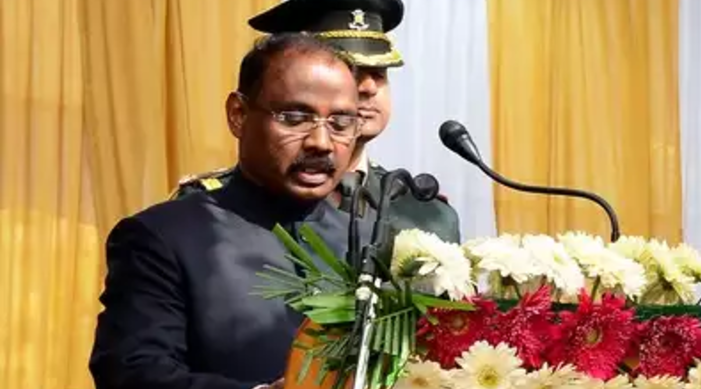 In a bid to attract investment to the new Union Territory of Jammu and Kashmir, Lieutenant Governor Girish Chandra Murmu on Monday told the business community that the abrogation of the erstwhile state's special status has removed all "artificial barriers" which will help make it an "economic paradise" for investors.

The Jammu and Kashmir administration organised a first of its kind pre-summit investors' meet here, inviting investments from across the world by highlighting the untapped potential of the Union Territory.

Speaking at the event, Murmu said, "We intend to take a leap forward in making Jammu and Kashmir an economic paradise for investors and I would like to invite you all to take the lead in setting up your enterprises in the Union Territory."

He spoke about the situation that prevailed before the state was converted into a Union Territory and said investments were flowing into the state but the previous governments were not able to catch up with the investments. "The former state was lagging behind", he said.

He said many apprehensions have been expressed about the situation after August 5, the day when the Centre revoked provisions of Article 370 of the Constitution and bifurcated the state into two Union Territories.

He said he was sure that they would be able to meet expectations as many issues were sorted after the re-processing of the constitutional system, which includes single-window clearance system and number of investor friendly policies.

After addressing the domicile issue and keeping the local employment in mind, all the "artificial barriers" created in the past because of the special status have been removed and now all the laws enacted by the central government are applicable to the UT as well, the Lieutenant Governor said. He asked investors to come and see the change for themselves saying "seeing is believing" and there are no restrictions anywhere.

The situation is "abnormal for militants only now", he said.

The event, which was a curtain-raiser to the three-day Global Investors' Summit to be held in Srinagar and Jammu this year, showcased policy and regulatory environment, investment opportunities in 14 focus sectors to boost manufacturing and employment generation in the region.

Murmu said that the Global Investors' Meet -- with the theme of 'explore, invest and grow' -- is a platform that will bring together senior entrepreneurs, leaders from corporate sector across the country, senior policy makers, development agencies, investors from across the world and local businessmen.

"Today's Pre-Summit Investors' Interaction has been organised to deliberate with you all on desired initiatives for creating an investor-friendly ecosystem and make you interested in Jammu and Kashmir," Murmu said.

Murmu, who is a retired IAS officer from Gujarat cadre, said the summit was inspired from the Prime Minister's vision of holding a similar meet during his tenure as chief minister of Gujarat.

Minister of State, Prime Minister's Office, Jitendra Singh congratulated the UT administration for taking such an initiative "at the right time and right place".
Singh said the Prime Minister's involvement in the region is leading to a lot of development in various sectors". He also alleged that many corrupt practices were being followed by the past regime and spoke about the special focus now on the development of Jammu and Kashmir and the way the union territory benefitted by the policies of the central government.

Jammu and Kashmir Chief Secretary B V R Subrahmanyam said, "Little is known about the places except what we have seen in the films, it is quite different what we know. J&K is not a backward place but it has the brightest and skilled people. I have read in a book that people in J&K don't die from the disease but from the old age."

The Chief Secretary added that the J&K administration is re-engineering all the processes and policies to break age-old barriers and creating a progressive ecosystem for investors.

"Easy availability of land through land bank and smooth clearances with dedicated teams to attend to investors will be the priority of the administration. It is one of the most beautiful and pollution-free places to work," he said.

More than 350 delegates from various sectors and leading organisations participated in the event which held over 45 Business to Government meetings.

The aim of the upcoming Global Investors' Summit 2020 is to exhibit the different investment opportunities available in the newly formed UT in different sectors including Tourism, Film Tourism, Horticulture and Post Harvest Management, Agro and Food Processing, Mulberry production for silk, Health and Pharmaceutical, Manufacturing, IT/ ITes, Renewable Energy, Infrastructure and Real Estate, Handloom and Handicraft and Education, said Kewal Kumar Sharma, Advisor to the LG.

Currently, the administration is developing two IT parks, ICD in Samba and has identified industrial land bank of over 6,000 acres across 20 districts to develop Industrial Parks.

Also, the J&K government has removed the toll barrier to enable seamless inward and outward movement of raw materials and goods.

The event was organised by Jammu and Kashmir Trade Promotion Organization (JKTPO), a nodal agency for J&K Government along with Media Partner PricewaterhouseCoopers (PwC), Confederation of Indian Industry (CII) as the National Partner and Ernst & Young as the knowledge partner.