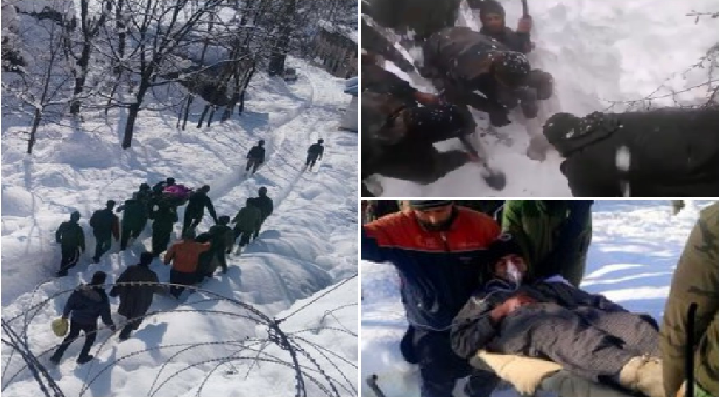 On January 14 when heavy winds blew snow up into a storm in Kashmir's Lachhipur, two locals, Tariq Iqbal and Zahoor Ahmed Khan, were hit by a snow slide

As Kashmir continues to grapple with snow and inclement weather, soldiers of the Indian Army have been busy saving lives.
On January 14 when heavy winds blew snow up into a storm in Kashmir's Lacchipura, two locals, Tariq Iqbal and Zahoor Ahmed Khan, were hit by a snow slide. According to a post made by the official Twitter handle of the Chinar Corps, a special unit of the Indian Army that handles operations in Jammu and Kashmir as well as along the Line of Control (LOC), as soon as the nearest army post became aware of the situation, they swung to action.
While Zahoor was rescued first, digging out Tariq from under the snow proved to be harder. After a frantic search of about twenty minutes, Tariq was rescued from under the snow and given medical support until his condition stabilised. He was eventually evacuated to Baramulla for further medical attention.
On Wednesday, the Chinar Corps shared an inspiring video of soldiers helping Tariq out. They can be seen tirelessly at work while they dig away at the hard snow until they finally find Tariq.

The video has received a lot of love on Twitter. Many saluted the bravery and dedication of the Indian Army despite harsh conditions.
The incident occurs even as Kashmir has been under a five-month long digital lockdown that has been in place since August 5 after the Bharatiya Janata Party government imposed an internet ban following outrage against the abrogation of Article 370 that took away the constitutionally guaranteed special status accorded to the former state of Jammu & Kashmir as an autonomous unit. The government also reorganised the state into two union territories including J&K and Ladakh.