PM all praise for self-employment programme in J&K, Ladakh 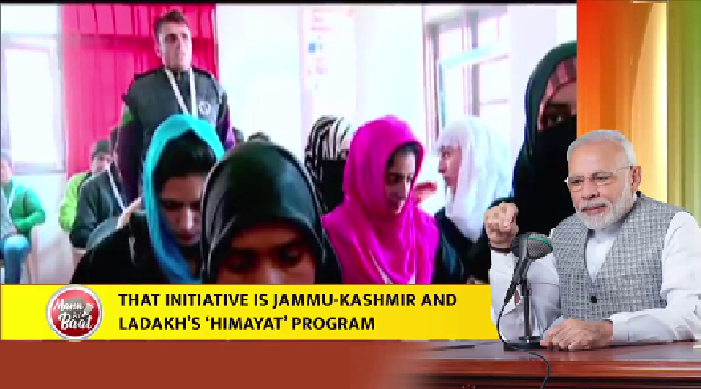 Prime Minister Narendra Modi today lavished all praises on ‘Himayat Programme’ in Jammu and Kashmir and Ladakh saying it has given a new found confidence to the youth and shown them a way to forge ahead. He named few youths in Doda, Anantnag and Kargil districts in the Union Territories of J&K and Ladakh, who have excelled in different fields under the ‘Himayat Programme’.

Modi mentioned the success story of ‘Himayat Programme’ in Jammu and Kashmir and Ladakh during his monthly programme ‘Mann Ki Baat’ on All India Radio, which was last for the year 2019.

Asserting that it was important for all citizens of the country become self-reliant and live their lives with dignity, Modi said he would like to discuss one such initiative that has caught his attentions and that is the ‘Himayat Programme’ of Jammu and Kashmir and Ladakh.

“The ‘Himayat Programme’ is actually associated with skill development and employment. In this programme, teenagers and youth in the age group of 15 to 35 years in Jammu and Kashmir, who couldn’t complete their studies for some reasons and had to leave schools and colleges midway, are associated,’’ he said.

The Prime Minister said 18,000 youth have been trained in 77 different trades during last two decades under the ‘Himayat Programme’. Out of them, around 5000 youth were working at different places while many others have taken to self-employment, he added.

“This will gladden the countrymen. The success stories of the youth, whose lives have changed under the ‘Himayat Programme’, truly touches the heart,’’ the Prime Minister said.

Quoting specific instances of the success stories of youth under ‘Himayat Programme’ in Jammu and Kashmir and Ladakh, Modi said Parveen Fatima, a resident of Kargil district in Ladakh, has become a Supervisor-cum-Coordinator following a promotion in a garment unit in Tirupur, Tamil Nadu. Until a year ago, she was living in small village of Kargil, he noted.

“Life of Parveen Fatima has undergone a major change. She has become confident… she has become self-reliant…she has also brought an opportunity for prosperity of her entire family. Fatima is not alone. The ‘Himayat Programme’ has changed the fate of other daughters and residents of Leh-Ladakh region and all of them are working in the same firm in Tamil Nadu today,’’ Modi said.

Similarly, he said, the ‘Himayat Programme’ has come as a boon for Fiaz Ahmad of Doda district, who after passing 12th class examination in 2012, couldn’t pursue further studies due to illness. Family of Fiaz faced trials and tribulations and eventually he was helped by the ‘Himayat Programme’ and today he is employed in Punjab.

Fiaz Ahmed’s Graduate studies, which he continued simultaneously with his training under the ‘Himayat Programme’, are also nearing completion. Recently, he was invited to share his experience at a ‘Himayat Programme’ and while narrating his story, he had tears welling in his eyes, the Prime Minister said.

Modi also cited the success story of Rakib-ul-Rahman of Anantnag district in Kashmir valley, who couldn’t complete his studies due to financial constraints.

He said one day Rakib came to know about the ‘Himayat Programme’ through a mobilization camp in his block and immediately enrolled himself in the ‘Retail Team Leader’ course.

“After completing his training today, Rakib is working in a Corporate House,’’ he added and said there were many examples of talented youth who have become symbols of change in Jammu and Kashmir, benefiting from the ‘Himayat Mission’.

The ‘Himayat Programme’, the Prime Minister said, is a perfect example of a great synergy between the Government, training partners, job providing companies and the people of Jammu and Kashmir.

He asserted that the programme has given a new found confidence to the youth in Jammu and Kashmir and shown them a way to forge ahead.
PTI adds from New Delhi:

Prime Minister Narendra Modi today said the coming decade belongs to the youth and lauded them for believing in the system and questioning it when it does not respond properly.

Addressing his last ‘Mann ki Baat’ of 2019, the Prime Minister said the youth hate anarchy and disorder and dislike casteism, nepotism and favouritism, remarks that come in the backdrop of recent violent protests in various university campuses over the Citizenship Amendment Act and proposed NRC.

“According to me, they appreciate the system. Not just that, they prefer to follow the system. And in the event of the system not responding properly, they get restless and even courageously question the system itself! I consider this attribute as a virtue.

“One can even say with certainty here, that the country’s youth detests anarchy of any sort. They despise any element of lack of governance and instability; abhorring any shades of nepotism, casteism, favouritism or gender discrimination,” he said.

He hoped the young India will play a key role in building modern India in the coming decade and cited Swami Vivekananda, who had said that young people who are full of energy and dynamism, possess the power to usher in change.

“I am of the firm belief that for India, this decade will be, not only about development and progress of the youth; it will also prove to be about the country’s progress, harnessing their collective might. This generation will play a major role in modernizing India; I feel it beyond any doubt,” he said.

Modi exhorted youth to give a thought to this responsibility and take on this resolve on Vivekananda’s birth anniversary on January 12.

He also cited cases when youth vociferously react whenever an incident of disorder takes place and make a video of it to make the culprit realise the consequence.

“Thus, our new generation is an embodiment, a reflection of a new system, a new order, a new age, a new thought. Today, India eagerly awaits this generation expectantly. These are the very people who have to elevate the country to greater heights,” he said.

Modi also urged youth to visit the Rock memorial in Kanyakumari, where Swami Vivekanand had entered into the meditative state, to get inspiration and urge to serve the poorest of the poor in the country.

The Prime Minister also exhorted the youth about the importance of Alumni meets in colleges and universities, and said some such meets have contributed something for society.

He cited the case of the Bhairavganj Health Centre in West Champaran district of Bihar, where thousands turned up for a health check-up camp and started an Alumni Meet of the local K.R. High School and a slipper manufacturing unit started by Phulpur women, with the help of ‘Gramin Ajivika Mission’.

The Prime Minister also urged people to promote local products in their purchases to promote ‘Swadeshi’.

He also lauded Parliamentarians for making the Parliament session productive and breaking records of the last 60 years.

“We have to walk far, we have to achieve a lot, we have to take our country to new heights. Let’s show immense faith in the pursuits (actions), the abilities and the resolve of 130 crore countrymen,” he said.