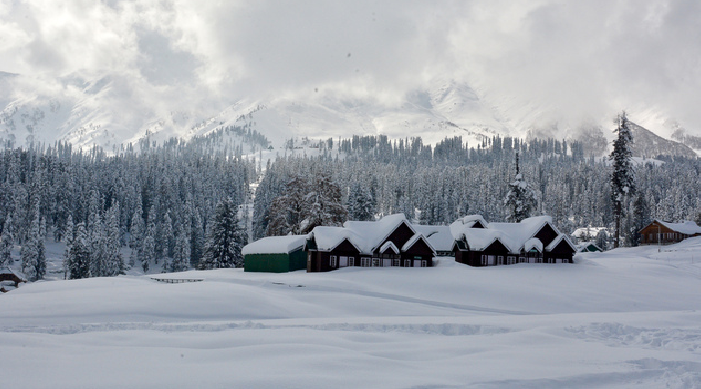 The 40-day harshest winter period in Kashmir, known in the local parlance as 'Chillai-Kalan', began today with the upper reaches of the valley receiving snowfall, Meteorological Department officials said.

These 40 days are when the chances of snowfall are the highest and the maximum temperature drops considerably.

The snowfall began early on Friday and continued through the night, the officials said.

The ski resort of Gulmarg in north Kashmir received 5 cm of snowfall and the mercury settled at a low of minus 9.6 degrees Celsius last night, they said.

Pahalgam, which serves as one of the base camps for the annual Amarnath Yatra in south Kashmir, received 21 cm of snowfall and recorded a minimum temperature of minus 3 degrees Celsius.

Qazigund in south Kashmir received 38.5 cm of snowfall and the mercury settled at a low of minus zero degrees Celsius.

There are reports of other areas in the upper reaches of the valley receiving snowfall, the MeT department said.

The weather in most plains, including Srinagar, remained largely dry during the night after fresh snowfall earlier in the day on Friday, it said.

The city recorded a low of minus 0.4 degree Celsius last night, it added.

The MeT office has forecast mainly dry weather for the week ahead.