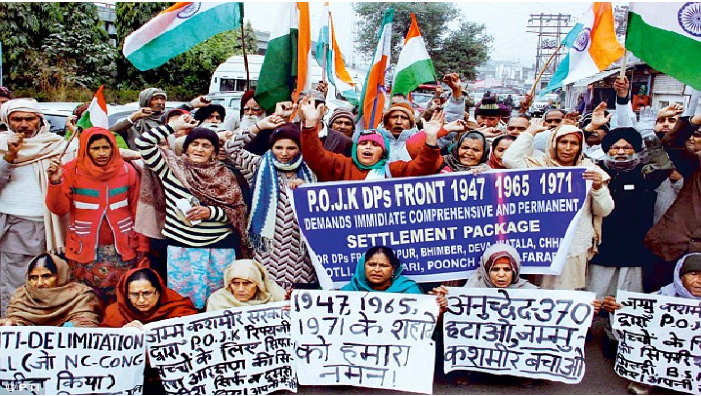 After abrogation of Article 370, every person who enjoys Indian citizenship, including the West Pakistan Refugees (WPRs), is now entitled to all the rights enjoyed by residents of J&K

On August 5, when the Centre abrogated Article 370, the move ended a 70-year struggle of West Pakistan Refugees (WPR) who were fighting for citizenship rights in Jammu and Kashmir.

WPRs had migrated from Sialkot in Pakistan’s West Punjab to J&K and other states of India in August 1947. Since these refugees and their descendants were not residents of the undivided J&K, they were denied the citizenship right of the erstwhile state. They also did not have the right to own the property, employment by the state government and vote in the assembly elections.

Their Indian citizenship allowed them the right to vote in parliamentary and assembly elections.

“Since both the J&K Constitution and the state subject law was abolished on August 5, every person who enjoys Indian citizenship, including the WPR refugees, are now entitled to all rights enjoyed by residents of J&K,” said former law secretary, Muhammad Ashraf Mir.

He said it was the state subject law that prevented non-state subjects, including the WPRs, from becoming permanent residents of J&K as per the eligibility conditions for granting Permanent Resident Certificate (PRC).

The state subject law, under which a permanent resident of J&K was entitled to get domicile or the PRC, was in force in the erstwhile state of Jammu and Kashmir much before the partition.

Enacted by Maharaja Hari Singh in 1927, the law barred outsiders from becoming permanent residents of J&K. There were two notifications issued under his rule, in 1927 and 1932, for strict implementation of the Act and issuance of the PRC.

According to the Act, two sets of people were entitled to the PRC – those living in the state (undivided J&K), including areas across the Line of Control (LoC) and the descendants of those who had been born in J&K but had migrated to other parts of the country.

‘Our struggle has borne fruits’

“We were struggling for our rights, especially those under the state subject, for the past 71 years. All these years we lived a life of beggars,” Gandhi told The Wire. “But today there is a festive mood within the community as our struggle has finally borne the fruits.”

After their arrival from Pakistan, these refugees settled in Jammu, Kathua and Samba along the international border, in the Jammu region. Most are Hindus, with 80% of Scheduled Caste communities.

As per official figures, 5,764 WPR families had migrated from Pakistan.

WPRAC president Gandhi said that many WPR families have also settled in Reasi, Udhampur and Doda districts of Jammu. He said the total number of families has increased to 21,169, comprising 1.5 lakh persons.

An ex-serviceman, Gandhi said the WPR’s committee, which was set up in 2006, has collected the “actual figures” through a door-to-door survey in all the districts and submitted the list to both the J&K government and the Centre.

“We have finally got justice. It is such a great feeling that we can now own property in J&K and our educated youth can apply for jobs,” said Gandhi.

Gandhi claimed that after the dilution of Article 370, more than 1,500 families have come forward claiming to be WPRs.

“We have prepared a supplementary list of all these families,” said 69-year-old Gandhi, who spearheaded the campaign for citizenship rights to the WPRs.

According to him, these families had “gone into hiding after losing hope of getting any justice from the J&K government”. “But they have now come forward and are claiming the rights WPRs are entitled to,” said Gandhi.

For the past two weeks, the WPRAC has shifted focus on the demand for an economic package to refugee families. Gandhi said each refugee family was entitled to Rs 5.5 lakh monetary support, under a package announced by the Centre three years ago.

A senior official said there were still many rules in J&K related to the delivery of services having reference to the PRC. “These rules have to be done away with to let these refugees and people from other states avail different rights,” the official said.

In 2008, soon after the BJP crossed the single-digit figure in the assembly elections for the first time, winning 11 seats, it started raising the issue of granting rights to WPRs.

In the years to come, as the party grew from strength to strength in Jammu, the issue found its way into the BJP’s election campaigning.

The party would often target its political rivals, including Congress and the National Conference, for “maintaining silence” on the plight of the WPRs.

“We have fulfilled the promise made with the West Pakistan Refugees and ensured they get all the rights enjoyed by residents of J&K,” said senior BJP leader Ashok Koul.

He credited Prime Minister Narendra Modi for the “historic and bold” decision to dilute Article 370 and revoke J&K’s special status.

Many senior party leaders, including Jammu MP Jugal Kishore, had joined in celebrations by the WPRs in Samba after the Centre’s August 5 decision.

“They (the WPRs) always showed faith in the BJP to deliver for them. They suffered immensely over the years but our party ensured an end to the discrimination meted out to them by successive regimes of Jammu and Kashmir,” said BJP spokesperson Altaf Thakur.

Political analyst, Noor M. Baba said the BJP was consistent in its support for the WPRs. “The August 5 decision will now cement the relations between the WPRs and the BJP. Politically, the BJP will benefit as far as the WPR vote bank is concerned,” said Baba.

Gandhi seconded Baba. “We have always maintained that whichever party supports our demands and work toward ending our discrimination, we will support them,” said Gandhi. “Unlike other parties, the BJP always stood behind us and ensured we get our rights. They deserve our support at every level.”