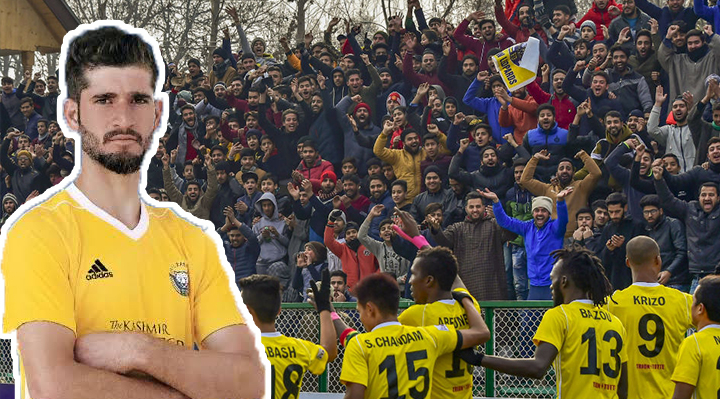 "Real Kashmir FC has had a fairy tale journey so far. Set up in 2016 to harness the energy of Kashmiri youth, the team has only gone from strength to strength"

Real Kashmir FC's journey in the last few years has been nothing but a fairy tale. After coming to existence in 2016 to harness the energy of Kashmiri youth, the team has only gone from strength to strength.

After getting promoted to the top division of Indian football in two years of its inception, Real Kashmir FC finished third in their first-ever appearance in the I-League 2018-19 season.

Real Kashmir FC is making just the right kind of noise in the I-League division and this year the 'Snow Leopards', as the club is popularly known, are going to be a force to reckon with in the upcoming season.

The team has had an outstanding pre-season despite recent challenges on-ground. They have defeated big names from I-League and rival Indian Super League (ISL) teams in friendly games and they are looking to improve their position this season.

Team's local player from Kashmir, Muhammad Hammad on Tuesday (November 12) revealed a lot of youngsters are taking inspiration from the club and they are seriously pursuing football as a career option.

Hammad is a product of Real Kashmir Academy and his progress is an inspiration for the youth in the hill state, which lost its statehood on October 31.

When asked about how his personal and the club's success helped the youth in the valley to express themselves in the field of sport and pursue a career in football, Hamad responded in positive.

"I have personally witnessed a lot of change in the last few years in the mindset of the kids. When I started playing, it was my dream to watch Mohun Bagan and East Bengal play. Not we have an I-League club back in our hometown (Srinagar) and that has encouraged a lot of youth to pick up the sport. The youngsters are getting a lot of opportunities due to that.

"Also, when the football giant clubs like Mohun Bagan and East Bengal come to Srinagar for I-League matches, the youngsters get inspired watching the players compete. Youth get this feeling that we could also compete at this level if we work hard and there is already a local club in their backyard which is helping the local talents and catering to the grassroots level.

Jammu and Kashmir is now a Union Territory after the Union Government decided to abrogate Article 370 from the state on August 5, 2019, ending the special status accorded to the country's only Muslim-dominated state. Moreover, the state was bifurcated into two UTs J&K and Ladakh by the Centre. The valley is under lockdown since August and life is getting back on the track at snail's pace there.

When asked what problems the players faced in Srinagar during the lockdown as even the telephone lines, mobile and internet services were blocked in the valley for more than a month, the defender said he faced some as he couldn't contact with his family for a week and a half but things gradually improved and continue to get normal.

"I couldn't contact my family for like a week or 10 days. As a team, we kept spending more time with each other so that no one feels lonely. But as a professional footballer our complete focus in on the pitch and we ensured that it never gets affected even during our training."
Real Kashmir FC's co-founder Sandeep Chattoo while interacting with the media persons during the home jersey launch event at a hotel in the national capital New Delhi said the atmosphere in the Valley is still conducive for the sport and the people are eagerly waiting for their home team to begin their I-League campaign on December 12.

"The atmosphere regarding football is good in Srinagar and the players are anxiously waiting for the team to get back into action. I can assure you that our opening match on December 12 in Srinagar is going to be jam-packed and I invite the media to come and join us on that day to witness the enthusiasm and passion of our fans," said Chattoo.

Talking about his team's strategy for the next season Hammad said this year the Snow Leopards are going to play a more attacking game.

"This year we are going to play a more attacking game because we were brilliant in the defence last season. Of course, that doesn't mean that we are going to compromise in the defence. This time we have a few more attacking options and we have good depth in the team as well so all that makes us a balanced side. The strategy is going to be the same and finish as the winners. We were underdogs in the previous season but this time around all the teams would be better prepared against us so we'll have to be at our best in the new season."