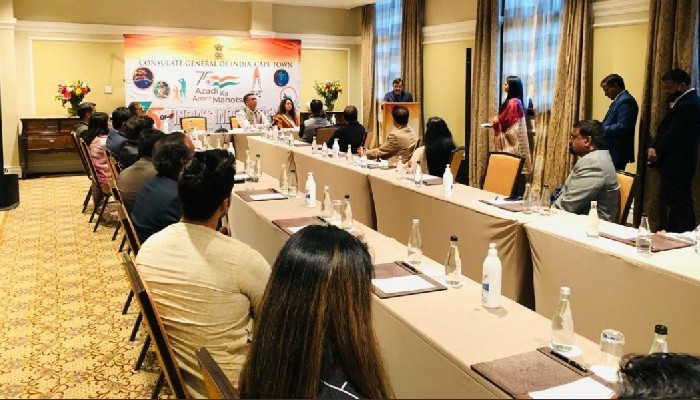 The CEC also urged them to register as overseas voters, as current numbers are “abnormally low.”

The interactions took place when a delegation led by CEC Chandra visited the two countries from 9 to 19 April.

During these interactions, Chandra also highlighted the new electoral reforms undertaken in the past few months which included four qualifying dates in a year for registration of eligible citizens as electors as compared to once a year earlier, linking of Electoral Roll and Aadhar data and extension of postal ballot facility to new categories of voters i.e. senior citizens aged 80 plus years, PWDs and Covid affected persons.

The Election Management Bodies (EMBs) of South Africa and Mauritius are also MOU partners with ECI.

"The three countries share a relationship that is fundamental and unique, rooted in the collective experiences and cumulative strength of their people,” the ECI said.

India is currently the Chair of AWEB, the largest conglomeration of 118 EMBs of the world and South Africa is the Vice Chair. Both India and South Africa are the founding members of this organization.

CEC Chandra said South Africa had made great strides in democracy and will host the next AWEB general meeting in October 2022.

While highlighting the need for AWEB to reinvent itself, Chandra stressed on three areas for further strengthening of this institution, the ECI said.

First, AWEB must endeavour to come out with standard protocols for various aspects of election management which will be known as AWEB global standards and will help EMBs to work towards achieving these goals.

Two, increasing the interaction between members through regional thematic summits, celebrating significant dates in the AWEB calendar like its foundation day on the pattern of India’s National Voters’ Day and developing an annual activities calendar for AWEB.

He offered that ECI would be happy to organize more training programs including customized programmes for AWEB members at India International Institute of Democracy and Election Management (IIIDEM).

"The two EMBs are not only closely connected through the formal relationship of MoU but also by a close relationship of understanding of each others’ systems, support and drawing strength from each other. CEC gave a snapshot of recent elections held in India and stated that the two Commissions would continue sharing best practices, skills and experiences for mutual benefit," the ECI said.