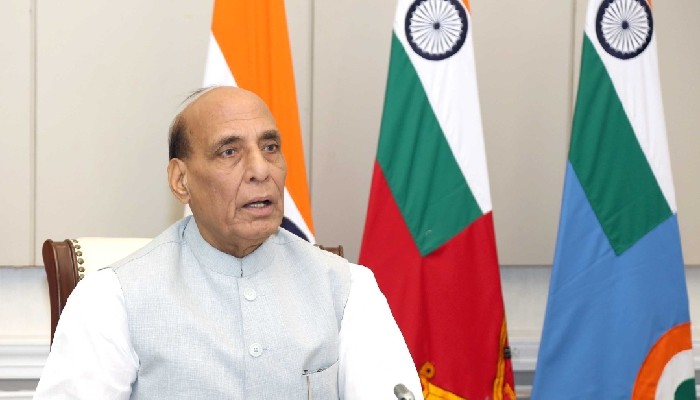 Rajnath Singh addresses the American Chamber of Commerce in India through video conferencing on Thursday.

India and the US have a growing convergence of strategic interests, Singh said

Defence Minister Rajnath Singh on Thursday urged American companies to come and invest in India and support the 'Make in India' programme.

The Minister called upon US companies to take advantage of the policy initiatives taken by the Prime Minister Narendra Modi-led Government in India and carry out joint R&D, manufacturing and maintenance of defence equipment to achieve the vision of ‘Make in India, Make for the World’.

India and the US have a growing convergence of strategic interests and both sides seek a resilient and rules-based international order that safeguards the sovereignty and territorial integrity of all countries, Singh said on Thursday.

The Defence Minister said the recent India-US '2+2' dialogue and fruitful conversation between Prime Minister Modi and President Joe Biden have created the ground for a more ambitious and strategic engagement between the two countries.

In an address at the American Chamber of Commerce in India, he said both India and the US share a common vision of a free, open, inclusive and rules-based Indo-Pacific and Indian Ocean Region.

"We have a growing convergence of strategic interests as both countries seek a resilient, rules-based international order that safeguards sovereignty and territorial integrity, upholds democratic values and promotes peace and prosperity for all," he said.

The defence minister also described the India-US economic engagement as one of the defining business relationships of the 21st century and said there has been a rebound in bilateral trade over the last year, surpassing $113 billion in goods.

Singh said the "defence pillar" of the US-India relationship is strong and growing.

"It is built on foundational bilateral agreements, military to military engagements, cooperation in the enhancement of defence capabilities and now a new emphasis on co-development and co-production," he said.

"Of late, some of the US companies have expanded their local presence in partnership with Indian companies, producing in India, for India and for the world. However, we believe this is just a beginning," Singh said.

The India-US '2+2' dialogue had taken place in Washington on April 11. Defence Minister Singh and External Affairs Minister S Jaishankar held the dialogue with US Secretary of Defence Lloyd Austin and Secretary of State Antony J Blinken.

"As we move forward to strengthen our relationship, I would like to emphasise the need to move from a buyer-seller relationship to one of partner nations and business partners," Singh said. "I think, India and the United States are uniquely poised to leverage each other's strengths for a win-win model in the coming years," he said.