Prime Minister Narendra Modi and UK Prime Minister Boris Johnson, who met in New Delhi on Friday, have decided to do their best to conclude the Free Trade Agreement (FTA) between the two countries by the end of this year.

Speaking at the Joint Press Meeting with the Prime Minister of UK, PM Modi said a Comprehensive Strategic Partnership between the two countries was established last year.

“And to give direction to our relationship in this decade, we also launched an ambitious ‘Roadmap 2030’. In our conversation today, we also reviewed the progress made in this roadmap, and also set some goals for the future,” he said.

Noting that teams of both countries are working on the subject of the Free Trade Agreement (FTA), Prime Minister Modi said that the negotiations were progressing well and that they had decided to do their best to conclude the FTA by the end of this year.

He added that in the last few months, India had concluded Free Trade Agreements with UAE and Australia.

“At the same pace, with the same commitment, we would like to move forward on FTA with UK as well,” the Indian Prime Minister mentioned.

Stating that he and PM Johnson also talked about the comprehensive reforms underway in India, the infrastructure modernization plan and the National Infrastructure Pipeline, PM Modi said they welcomed the increasing investment by UK companies in India and a great example of this was on display in Halol in Gujarat.

He further said that, “One point six million Indian origin people living in the UK in every sector of society and economy.”

“We are proud of his achievements. And we want to further strengthen this living bridge. Prime Minister Johnson has personally contributed a lot in this direction. I congratulate him for this,” Modi stated.

He said, the two leaders have made their commitment to fulfill the resolutions taken at COP-26 held in Glasgow. Today they had decided to deepen our climate and energy partnership, he added.

“We invite the UK to join India's National Hydrogen Mission and I heartily welcome the establishment of Strategic Tech Dialogue between us,” the Prime Minister said.

“The conclusion of the implementation arrangements of the Global Innovation Partnership will prove to be a very important initiative between us today. This will further strengthen our development partnership with other countries,” he mentioned.

“Under this, India and the UK will co-finance up to $100 million for the transfer and scaling-up of ‘Made in India’ innovations to third countries. These will also help in the achievement of the Sustainable Development Goals, and efforts to tackle climate change,” PM Modi informed.

“This will prove to be very useful for our start-ups and MSME sector to explore new markets, and to globalize their innovations,” he said.

“We also discussed the many developments taking place at the regional and global level. We emphasized on maintaining the Indo-Pacific region based on a free, open, inclusive and rules-based order. India welcomes the UK's decision to join the Indo-Pacific Oceans Initiative,” Prime Minister Modi added.

“We have stressed on dialogue and diplomacy in Ukraine for an immediate ceasefire and resolution of the problem. We also reiterated the importance of respect for the territorial integrity and sovereignty of all countries,” he revealed.

“We reiterated our support for a peaceful, stable and secure Afghanistan and for an inclusive and representative Government. It is necessary that Afghan land should not be used to spread terrorism in other countries,” PM Modi stated further. 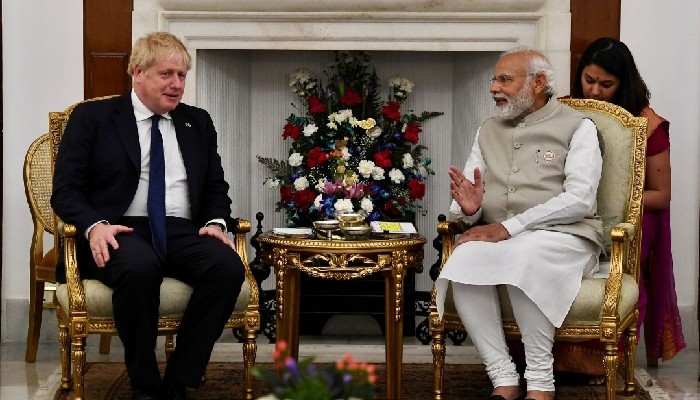