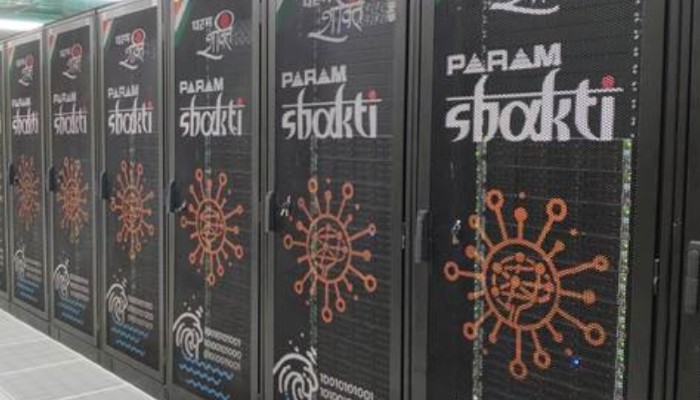 The Supercomputing Facility has 17680 CPU cores along with 44 GPUs.

This system has been tested extensively for commercial, open-source and in-house software

The made-in-India Petascale Supercomputer PARAM Shakti has been dedicated to the nation as a part of the Nationwide Supercomputing Mission (NSM) at the Indian Institute of Technology (IIT), Kharagpur.

The supercomputer was inaugurated on Sunday by West Bengal Governor Jagdeep Dhankhar.

The National Supercomputing Mission (NSM) is being steered jointly by Ministry of Electronics & Information Technology (MeiTY) and the Department of Science and Technology (DST).

Announcing the development in Monday, MeiTY stated that the PARAM Shakti supercomputing facility is accelerating analysis and improvement actions in multidisciplinary domains of computational and data sciences, as it provides large-scale computing power to the user community of IIT Kharagpur and neighbouring academic and R&D institutes.

A Memorandum of Understanding (MoU) to this effect was signed between IIT Kharagpur and the Centre for Development in Advanced Computing (CDAC) in March 2019 to establish this state-of-the-art Supercomputing Facility with 17680 CPU cores along with 44 GPUs, the ministry said.

This facility has pioneered in using RDHX based efficient cooling systems to obtain a high power usage effectiveness. This system has been tested extensively by both IIT Kharagpur and CDAC for commercial, open-source and in-house software pertaining to diversified applications.

Addressing the gathering, Dhankhar stated, “Innovation and analysis alone decide whether or not a nation will proceed to be on improvement trajectory or not. It’s the intent of giving again to the society and never the dimensions that issues extra. The Azadi ka Amrit Mahotsav is a chance to be availed by all of us to know our actual heroes.”

According to MeiTY, IIT Kharagpur has been following the mandate of NSM towards the development of computationally efficient software for supercomputing platforms and applications for large-scale industrial and scientific problems.

This centre has been organizing courses, workshops, bootcamps etc. in several domains pertaining to the fundamentals of supercomputing and data sciences and their application to diversified fields, including Agriculture, Astronomy, Biology, Mechanical Engineering, Material Sciences etc.

IIT Kharagpur has also established the Centre for Computational and Data Science with a mandate to train researchers in supercomputer accelerated R&D.

The institute is also one of the NSM nodal centres for training in HPC and AI and working on the development of manpower required for Supercomputing Research across the nation.

Some of the identified focus areas in which this supercomputing based research will be of great value are:

India is fast emerging as a leader in high power computing with the National Supercomputing Mission (NSM) boosting it to meet the increasing computational demands of academia, researchers, MSMEs, and start-ups in areas like oil exploration, flood prediction as well as genomics and drug discovery.