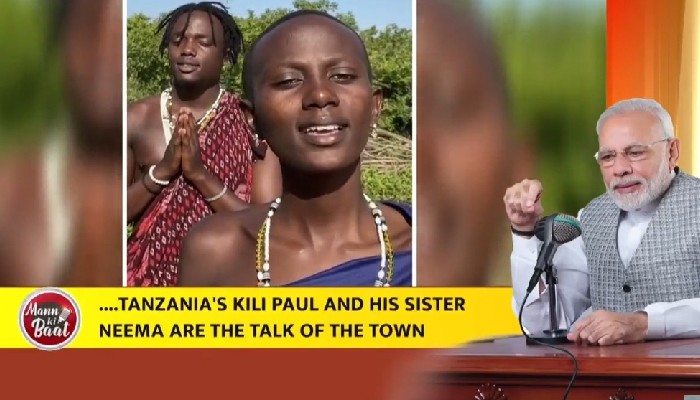 The siblings have a passion, a craze for Indian music, PM Narendra Modi said.

Talking about the Tanzanian siblings during the 86th edition of his ‘Mann ki Baat‘ programme, PM Modi said, "These days, two Tanzanian siblings, Kili Paul and his sister Neema, are in the news a lot on Facebook, Twitter and Instagram, and I’m sure you too, must have heard about them".

“They have a passion, a craze for Indian music and for this reason they are also very popular,” he stated.

Noting that their technique of Lip Sync shows how hard they work at it, the Indian Prime Minister said that recently, a video of Kili singing our National Anthem ‘Jana Gana Mana’ on the occasion of Republic Day went viral.

“A few days ago, he also paid a soulful tribute to Lata didi by presenting her song. I really appreciate these two siblings Kili and Neema very much for their wonderful creativity,” he added.

Informing that a few days ago, Kili had also been honoured at the Indian Embassy in Tanzania, PM Modi said the magic of Indian music is such that it fascinates everyone.

“Today, when India is celebrating the important festival of 75th year of its Independence, similar initiatives can be carried out regarding patriotic songs, wherein foreign nationals or famous singers from abroad are invited to render Indian patriotic songs,” Prime Minister Modi suggested.

“Not only this, if Kili and Neema in Tanzania can lip sync the songs of India in this manner, aren’t there many types of songs in my country... in many languages ​​​​of our country... can’t any Gujarati children do that with Tamil songs....some children of Kerala could do that with Assamese songs.... some Kannada children could that with songs of Jammu and Kashmir,” he argued.

“We can create such an environment in which we will be able to experience 'Ek Bharat-Shreshtha Bharat'. Not only this, we can definitely celebrate Azadi ka Amrit Mahotsav in a novel way,” Modi said.

“I urge the youth of the country to make videos of the popular songs of Indian languages ​​in their own way.... you will become very popular! And the diversity of the country will be introduced to the new generation,” he mentioned.