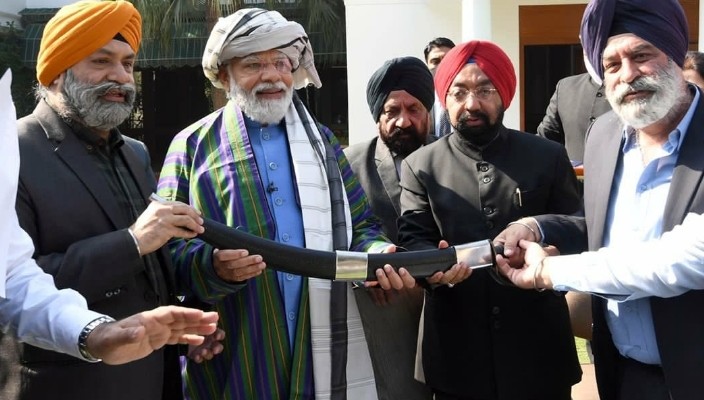 Prime Minister Narendra Modi on Saturday met an Afghan Sikh and Hindu delegation at his residence, telling them that India was their "home".

Welcoming the delegation, PM Modi said that they were not guests but were in their own house.

The 33-member delegation primarily included Afghan origin Sikhs and Hindus who have migrated to the country in the last two decades along with others who were evacuated after the Taliban-led takeover of Afghanistan on August 15, 2020.

In this light, he also talked about the significance of the Citizenship Amendment Act (CAA) and its benefits for the community. He assured them of continuous support in future as well to resolve all issues and difficulties faced by them.

India has contributed significantly in recent years to the development of Afghanistan. India recently supplied three tonnes of medicines to Afghanistan as part of its fourth batch of medical assistance under humanitarian aid to the war-torn country.

Indian development projects have been undertaken in critical areas like water, road, healthcare, education, agriculture and capacity building. India's emphasis has been on the welfare, and the well-being of the people of Afghanistan.

The meeting comes a day after PM Modi hosted several prominent Sikh spiritual leaders and highlighted the work done by his government for the community.

On Friday, PM Modi had taken to Twitter to post photographs of his meeting with members of the Sant Samaj and Sikh community, including Uday Singh from Sri Bhaini Sahib of Ludhiana, a spiritual leader of the Namdhari Sect.

In a tweet, PM Modi said, "Met with eminent personalities of Sant Samaj and Sikh community. These were all the Patwants who spread the Sikh community and culture all over the country and the world and served humanity."

In a video of the meeting shared by the Prime Minister's Office (PMO), the Sikh representatives were seen gifting a 'kirpan' to PM Modi.