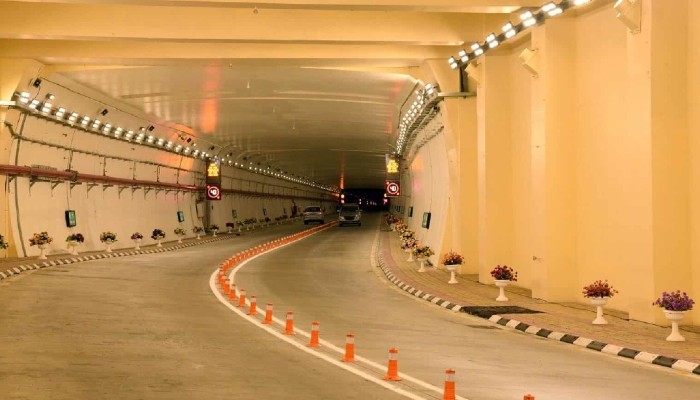 Atal Tunnel has been constructed under the 'Rohtang Pass' on the Manali - Leh Highway.

The Atal Tunnel has been officially recognised by the World Book of Records as the 'World's Longest Tunnel above 10,000 Feet".

The Atal Tunnel, which is 9.02 kilometres long, has been constructed by the Border Roads Organisation (BRO) to connect Manali to the Lahaul-Spiti Valley in Himachal Pradesh. It was dedicated to the nation by Prime Minister Narendra Modi on October 3, 2020.

BRO Director General Lt General Rajeev Chaudhary received the certificate on behalf of the organisation for the achievement of constructing this engineering marvel in New Delhi on Wednesday, according to a press released issued by the Ministry of Defence.

World Book of Records London is an organisation that catalogues and verifies extraordinary records across the world with authentic certification.

Atal Tunnel has been constructed by the BRO under the 'Rohtang Pass' on the Manali - Leh Highway under the conditions of freezing temperatures in difficult terrain.

The tunnel has been an important step for connectivity as prior to its construction, the highway remained closed for six months during winter season. Due to the closure of the highway, Lahaul and Spiti remained cut off from the mainland for around six months. The Atal tunnel has been named after former PM Atal Bihari Vajpayee.

The Atal Tunnel has reduced the distance on Manali - Sarchu road by 46 kilometres and travelling time has also been reduced by four to five hours. The tunnel has helped in providing connectivity between Manali to Leh in all the weather conditions. In addition, the tunnel has also offered an alternate link to the armed forces for travelling to Ladakh.

According to the Ministry of Defence, the construction of the Atal Tunnel has been a test of 'technical & engineering skills as well as human endurance and machine efficacy. The tunnel has been constructed in extremely harsh and challenging terrain, wherein the temperatures in winters dipped to -25 degrees.

Fragile geology and challenges like seepage of Seri Nala, leading to the flooding of the Atal Tunnel, coupled with high overburden & excessive snowfall were some of the key construction challenges successfully surmounted by the workers of BRO.