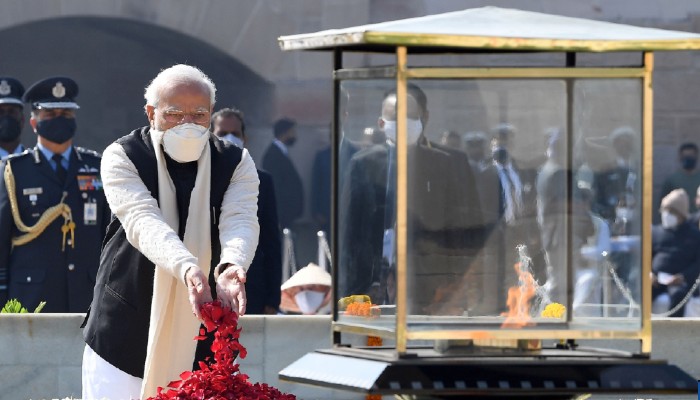 In the first episode of monthly radio programme ‘Man Ki Baat of this year, Prime Minister Narendra Modi on Sunday paid tribute to the teachings of Mahatma Gandhi on the occasion of his 74th death anniversary, which is observed as ‘Martyrs Day’.

“Today is the death anniversary of our revered Bapu Mahatma Gandhi ji. The 30th of January reminds us of the teachings of Bapu,” the Prime Minister said in his monthly radio programme.

Talking about the just concluded Republic Day function in New Delhi, Prime Minister Modi laid focus on changes that have been brought into the function of this national day.

“One change you must have noticed is that now the Republic Day functions will start from the 23rd of January, i.e. the birth anniversary of Netaji Subhas Chandra Bose and will continue till the 30th of January i.e. Gandhiji's death anniversary. A digital sculpture of Netaji has also been installed at India Gate,” the Prime Minister said.

Prime Minister Modi also talked about the country’s attempt to re-establish national symbols in the 75 years of its independence.

“In the Azadi Ka Amrit Mahotsav, the country is re-establishing its national symbols through these efforts. We saw that the ‘Amar Jawan Jyoti’ near India Gate and the Jyoti lit at the ‘National War Memorial’ in the vicinity, were merged. There were tears in the eyes of many countrymen and martyr families on this emotional occasion,” PM Modi said.

“At the 'National War Memorial', the names of all the brave hearts of the country who have been martyred since Independence have been inscribed.”

The Prime Minister in his radio programme, mentioned about ex-soldiers’ writing letters to him on The Amar Jawan Jyoti.

“Some former soldiers of the army have written to me saying that – The 'Amar Jawan Jyoti' lit at the memorial is a symbol of the immortality of the martyrs. Truly, like 'Amar Jawan Jyoti' our martyrs, their inspiration and their contribution are also immortal. I would urge all of you to certainly visit the 'National War Memorial' whenever you get an opportunity. Do take along your family and children too. Here you will feel a different energy and inspiration,” he said.