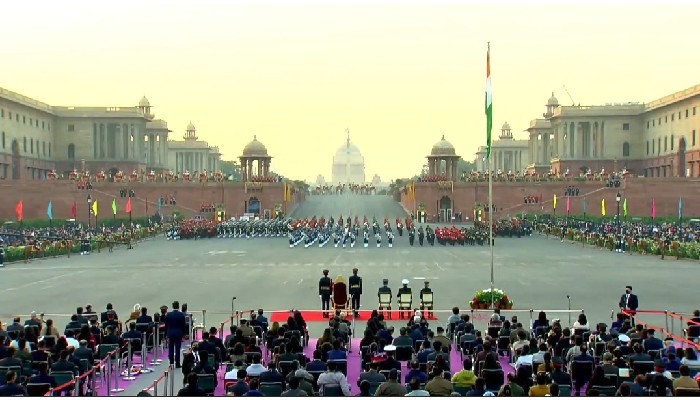 A view of the Beating Retreat ceremony at New Delhi's Vijay Chowk on Saturday.

In a first, the ceremony witnessed a spectacular show of about 1,000 drones as they showcased India's achievements through many creative formations in the dark sky.

With this, India became the fourth country in the world to put up an indigenously designed and conceptualised drone show of this size after China, Russia & US.

A number of new tunes were added to the ceremony to celebrate ‘Azadi ka Amrit Mahotsav', including ‘Kerala’, ‘Hind ki Sena’ and ‘Ae Mere Watan Ke Logon’. The event came to a close with the ever-popular tune of ‘Sare Jahan se Acha’.

A laser projection mapping show on the walls of North Block and South Block commemorated 75 years of India's independence.

The ceremony was graced by President and Supreme Commander of the Armed Forces Ram Nath Kovind.

Other dignitaries, including Prime Minister Narendra Modi and Defence Minister Rajnath Singh, also witness the show, which was conceptualized, designed, produced and choreographed under the ‘Make in India’ initiative.

The Beating Retreat ceremony marks a centuries-old military tradition, dating back to the days when troops disengaged from a battle at sunset.

As soon as the buglers sounded the “retreat”, the troops ceased fighting, sheathed their arms and withdrew from the battlefield. Colours and standards are cased and flags lowered at retreats.