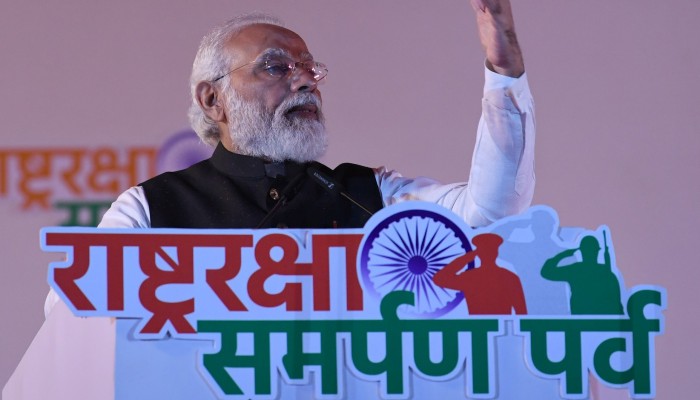 PM Modi at Raksha Samarpan Parva in Jhansi on Nov 19

These projects include launch of NCC Alumni Association, the Prime Minister was registered as the first member of the association; launch of national programme of simulation training for NCC cadets; kiosk to pay tribute to the fallen heroes at national war memorial; mobile app of national war memorial; DRDO designed and developed advanced electronic warfare suite ‘Shakti’ for Indian Naval ships; Light Combat Helicopter and drones.

He also laid the foundation stone of the Rs 400 crore project of Bharat Dynamics Ltd at Jhansi Node of the UP Defence Industrial Corridor.

The Prime Minister also laid the foundation stone of the 600 MW Ultramega Solar Power Park at Garautha in Jhansi.

It is being constructed at a cost of over Rs 3000 crore, and will help provide the dual benefits of cheaper electricity and grid stability.

Prime Minister Modi also inaugurated Atal Ekta Park in Jhansi. Named after Former Prime Minister Atal Bihari Vajpayee, the park has been built at a cost of over Rs 11 crore, and is spread across an area of about 40,000 square metre. It will also house a library, as well as a statue of Atal Bihari Vajpayee. The statue has been built by the renowned sculptor Ram Sutar, the man behind the Statue of Unity.

Addressing the gathering, Prime Minister Modi noted the birth anniversary of Rani Laxmibai, the pinnacle of valor and might and said today this land of Jhansi is witnessing the grand Amrit Mahotsav of freedom!

The Prime Minister paid tribute to many heroes and heroines for their contribution to the history of valor and sacrifice.

“This land has also been a witness to the bravery and military prowess of Veerangana Jhalkari Bai, who was an inseparable ally of Rani Laxmibai. I also bow at the feet of that immortal heroine of the freedom struggle of 1857. I bow to the Chandelas-Bundelas, who wrote immortal tales of Indian valor and culture from this land, who made India proud! I bow to the pride of Bundelkhand, those brave Alha-Udals, who are still a symbol of sacrifice and sacrifice for the protection of mother-land” Prime Minister Modi narrated.

The Prime Minister also remembered Major Dhyan Chand, son of Jhansi and talked about the renaming of the highest award in sports excellence after the Hockey legend.

The Prime Minister remarked that today, on the one hand, the strength of our forces is increasing, but at the same time, the ground is also being prepared for the capable youth to protect the country in future.

The 100 Sainik Schools, which are starting, will work in the coming times to give the future of the country in powerful hands.

He said that the government has started admission of daughters in Sainik Schools. In 33 Sainik Schools, the admission of female students has already started from this session. Daughters like Rani Laxmibai will also emerge from Sainik Schools, who will take the responsibility of defense, security and development of the country on their shoulders.

The Prime Minister, who was registered as the first member of NCC Alumni Association, called upon the fellow alumni to come forward in service to the nation and contribute in whatever manner possible.