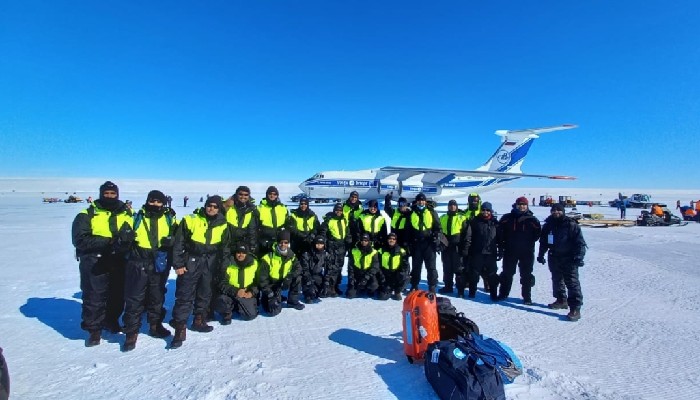 Members of the first batch of the 41st expedition to Antartica.

The Indian Antarctic program, which began in 1981, has built 3 permanent research base stations in Antarctica

The 41st expedition has two major programmes that will help in improving the understanding of Antarctic climate, westerly winds, sea-ice and greenhouse gases from a single climate archive for past 10,000 years, said a statement of the Ministry of Earth Science on Monday.

The first program encompasses geological exploration of the Amery ice shelf at Bharati station. This will help explore the link between India and Antarctica in the past.

The second program involves reconnaissance surveys and preparatory work for drilling of 500 meters of ice core near Maitri.

The ice core drilling will be done in collaboration with the British Antarctic Survey and the Norwegian Polar Institute.

In addition to accomplishing scientific programs, it will replenish the annual supplies of food, fuel, provisions, and spares for operations and maintenance of life support systems at Maitri and Bharati.

Four more batches shall be landing in Antarctica by air using DROMLAN facility and onboard chartered ice-class vessel MV Vasiliy Golovnin by mid-January 2022.

The Indian Antarctic program, which began in 1981, has completed 40 scientific expeditions, and built three permanent research base stations in Antarctica, named Dakshin Gangotri (1983), Maitri (1988) and Bharati (2012).

As of today, Maitri and Bharati are fully operational. The National Centre for Polar and Ocean Research (NCPOR), Goa—an autonomous institute under the Ministry of Earth Sciences—manages the entire Indian Antarctic program.

As India is committed to maintaining the continent of Antarctica free of COVID-19 and the highest standards of safety, the Indian contingent has reached Antarctica following a strict medical examination at the All India Institute of Medical Sciences, New Delhi.

The Indian contingent has also been trained for snow-ice acclimatization and survival at the Mountaineering and Skiing Institute, ITBP Auli, Uttarakhand; and a stringent sanitary protocol including a 14 days quarantine at Cape Town, South Africa.

The crew is expected to return to Cape Town in late March/early April of 2022, leaving a team of 48 members for over winter.