Today's India is confident about its heritage: PM Modi 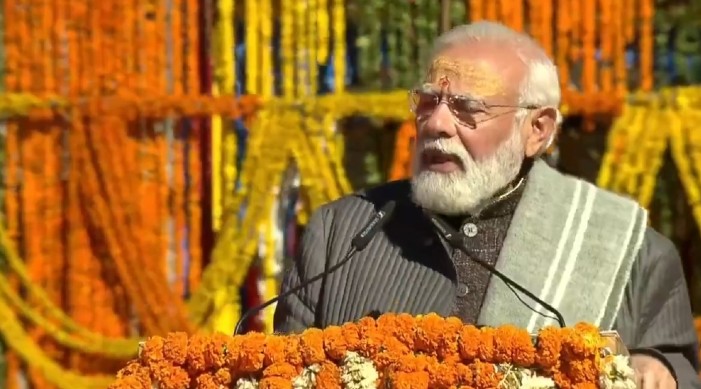 We can imagine how the ancient cultural form of India must have been, Prime Minister Narendra Modi said

"Today, our cultural heritage centers of faith are being viewed with deserved and valid pride, as they should be viewed," PM Modi said.

He was addressing a gathering after laying foundation stones and dedicating to the nation various development projects in Kedarnath, Uttarakhand.

“A grand temple of Lord Shri Ram is coming up in Ayodhya. Ayodhya is getting its glory back. Just two days ago, the whole world saw the grand celebration of Deepotsav in Ayodhya. Today we can imagine how the ancient cultural form of India must have been”, Shri Modi said.

It is not acceptable for India to be timid about deadlines and goals, Prime Minister Modi added during his address.

"Today, India sets tough goals and deadlines for itself," he said.

The Prime Minister said that new facilities like shelters, facilitation centres will ease the lives of priests and devotees and allow them to fully immerse in the divine experience of the pilgrimage.

Recalling the Kedarnath floods in 2013, the Prime Minister noted that damage caused by the floods years ago was unimaginable.

He said “people who used to come here used to think that will this our Kedar Dham stand up again? But my inner voice was saying that it will stand with more pride than ever before.”

The Prime Minister said due to the grace of Lord Kedar and inspiration of Adi Shankaracharya and his experience of managing the aftermath of the Bhuj Earthquake, he could be of help in those difficult times.

He thanked all the workers, priests, Rawal families of the priests, officials and the Chief Minister for relentlessly pursuing the development works at the Dham.

He said he kept monitoring the work through drones and other technologies. He said that “this combination of modernity with the eternal on this ancient land, these development works are the result of the natural grace of Lord Shankar.”

The Prime Minister lauded the discipline shown by Uttarakhand in the fight against Corona.

"Overcoming the geographical difficulties, today Uttarakhand and its people have achieved the target of 100 % single dose vaccination. This is the strength and power of Uttarakhand," he said.

The Prime Minister said that the third decade of the 21st century belongs to Uttarakhand.

He informed that work was going on at a fast pace on the Chardham road project, connecting with the Chardham highways.

“Keeping in mind the immense potential and full faith in the capabilities of the people of Uttarakhand, the State government is involved in the ‘mahayagya’ of Uttarakhand’s development”, he said.