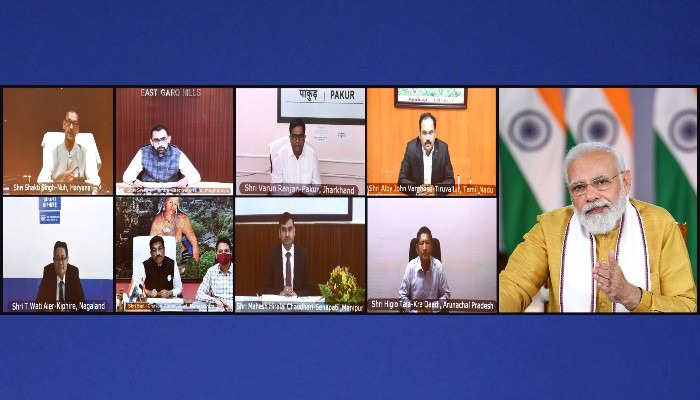 Prime Minister Modi recalled his meeting with Pope Francis at the Vatican, a few days ago

Prime Minister Narendra Modi on Wednesday asked state officials to seek help from religious and community leaders to maximize vaccination in the country. He said so during a review meeting with district magistrates of 40 districts with less than 50 percent coverage of the first dose and low coverage of the second dose of Covid-19 vaccine.

Prime Minister Modi who held review meeting with district magistrates soon after his visit to Rome and Glasgow, noted that religious leaders are very enthusiastic about the vaccination campaign.

He urged for a special emphasis on taking the message of religious leaders on vaccines to the public.

The Prime Minister asked the officials to change gears from arrangements made for taking people to the vaccination center and for safe vaccination to administering vaccines from door to door.

He urged the health workers to reach every house with passion ‘har ghar tika, ghar ghar tika’ - vaccine at every doorstep.

He also asked to go in the spirit of ‘Har Ghar Dastak’ knocking on every doorstep to ensure full vaccination.

“Now we are preparing to take the vaccination campaign to each household. With the mantra of ‘Har Ghar Dastak’, knock on every door, every household lacking the security net of a double dose of vaccine will be approached” he said.

The Prime Minister cautioned that while knocking on every house, equal attention needed to be paid to the second dose as well as the first dose.

Because whenever the cases of infection start decreasing, sometimes the feeling of urgency decreases. The urgency in administering the vaccines comes down among the people.

“You will have to contact those people who have not taken the second dose despite the stipulated time on a priority basis...ignoring this has created problems for many countries in the world” he warned.

The Prime Minister emphasized that under the free vaccine for all campaign, India created a record of administering about 2.5 crore vaccine doses in a day, this feat bears testimony to India’s capabilities, he said.

He asked the district officials to learn from good practices of their colleagues in better performing districts and emphasized approaches suitable for the local needs and the environment should be adopted.

The Prime Minister exhorted all officials to ensure that the country widens its vaccination coverage by the end of the year and enters the new year with renewed self-belief and confidence.

The Prime Minister also thanked the Chief Ministers present and said that their attention will encourage the district to work with more determination.

Modi said in this biggest pandemic of the century, the country faced many challenges.

He said “one special thing in the country's fight against Corona was that we found new solutions and tried innovative methods”.

He urged the administrators to work more on new innovative ways to increase vaccination in their districts. He conveyed that even the better performing districts had similar challenges but they were met with determination and innovation.

The Prime Minister suggested this can be done by forming a team of 20-25 people depending on the region. He also suggested trying to have a healthy competition in the teams that you have formed.

Exhorting the officials to prepare region-wise timetables for local goals, the Prime Minister said “You will have to do your best to take your districts nearer the national average.”

The District Magistrates gave an account of the issues and challenges being faced in their districts, which has resulted in low vaccination coverage.

They highlighted issues like rumours resulting in vaccine hesitancy, difficult terrain, challenges created due to prevailing weather conditions in recent months. They also presented an account of the steps that have been taken by them till now to overcome these challenges.

The DMs also shared good practises adopted by them which have led to increase in coverage.