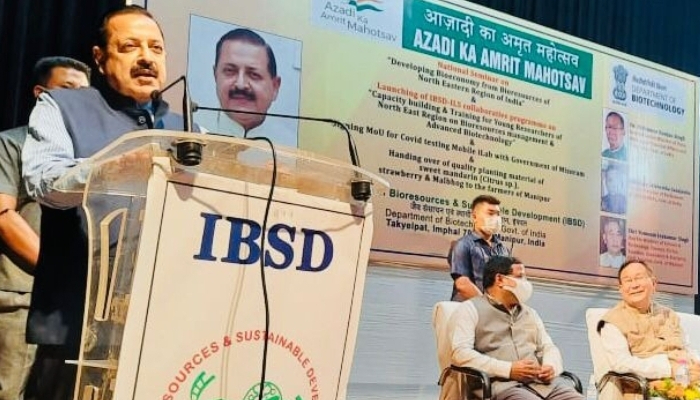 MoS Jitendra Singh at the Institute of Bio-resources and Sustainable Development (IBSD), Imphal.

The Eastern Himalayan Region is among the 34 biodiversity Hotspots of the world, he said

India will be recognized as a Global Bio-manufacturing Hub by 2025 and will figure among the top 5 countries of the world, Union Minister of State for Science and Technology Jitendra Singh said on Tuesday.

He added that India’s Bio-Economy was on its way to achieve 150-billion-dollar target from the current 70 billion-dollar by 2025. It will contribute effectively to the Prime Minister’s vision of a 5 trillion-dollar economy by 2024-25, pointed out.

Within India, the Northeast will be developed as India’s Bio-Economic Hub, said Singh.

He was speaking after visit to the Institute of Bio-resources and Sustainable Development (IBSD), Imphal.

According to the Minister, the Eastern Himalayan Region was one of the mega-biodiversity rich zones and is among the 34 biodiversity Hotspots of the world.

There was a need to put these invaluable genetic resources to use for the economic growth of the region in particular and to the nation in general, through biotechnological interventions, he said.

The Department of Biotechnology had played a pivotal role to build capacity in the North Eastern region for carrying out biotechnology research to address issues specific to the region, Singh said.

It had also been implementing programmes for the societal upliftment of the local communities as the North Eastern region is a genetic treasure house of plant, animal and microbial resources, he added.