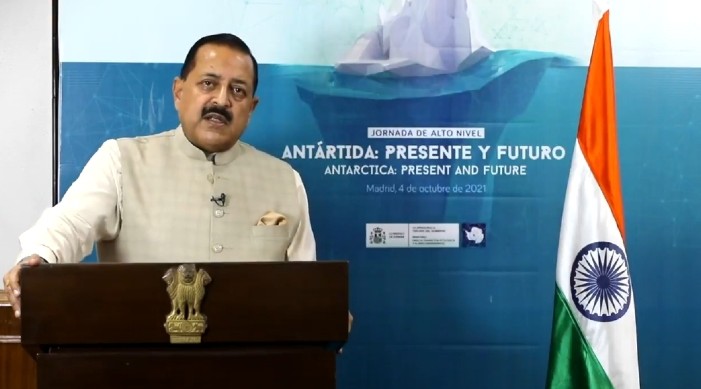 MoS Jitendra Singh addresses a conference to commemorate the signing of the Madrid Protocol.

Emphasizing its resolve to curtail carbon emissions in the Antarctic atmosphere, India has reaffirmed its commitment to the Protocol on Environmental Protection to the Antarctic Treaty.

India was committed to the comprehensive protection of the Antarctic environment and dependent and associated ecosystems, and the designation of Antarctica as a natural reserve devoted to peace and science, Union Minister of State Jitendra Singh said on Monday.

The Union Minister of State for Science and Technology was addressing the International Conference commemorating 30 years of the signing of the Madrid Protocol on Environmental Protection to the Antarctic Treaty.

Pointing out that 42 state parties acceding to the Madrid Protocol was a remarkable feat of sustainably preserving the Antarctic environment, MoS Singh said Indian felt honoured to sign the potocol in 1998.

India had already adopted the green energy initiative by experimenting with the feasibility of wind energy production and installed moderate output of Wind Energy Generators (WEG) on an experimental basis, the MoS pointed out.

The choice of Combined Heat and Power (CHP) for Bharati station to reduce carbon emissions in the Antarctic also promotes India's pledge to protect the environment, Singh added.

Singh said India was looking forward to contributing to the evolving Climate Change Response Work Programme of the Committee for Environmental Protection (CEP).

He described climate-induced Carbon Dioxide (CO2) uptake by polar oceans as one of the challenges for the next 30 years.

Highlighting India's commitment to the Protocol on Environmental Protection to the Antarctic Treaty, Singh listed the steps that had been taken by the country.

1. Implementing all Decisions, Resolutions and Measures adopted at ATCM in the Indian Antarctic programme effectively

2. Use of green alternate energy system in both the Indian Antarctic research stations; Maitri and Bharati like solar panels and wind energy generators so compromising use of fossil fuel gradually and making the station efficient with alternate green energy

3. Reduction of carbon footprints by using vehicles and machinery only when required at the most

4. Use of shared supply ship to deliver human resources, materials and machines to Antarctica

5. Control of the introduction of non-native species into Antarctica by any means or through vector transfer

India is one of the 29 Consultative Parties to the Antarctic Treaty.

India is also a member of Council of Managers of National Antarctic Programme (COMNAP) and Scientific Committee of Antarctica Research (SCAR). All these representations show the significant position that India holds among the nations involved in Antarctic research.

With the Himadri station in Ny-Alesund, Svalbard, Arctic, India now belongs to the elite group of nations that have multiple research stations within the Polar Regions.

The Protocol on Environmental Protection to the Antarctic Treaty was signed in Madrid on October 4, 1991 and entered into force in 1998. It designates Antarctica as a “natural reserve, devoted to peace and science”.