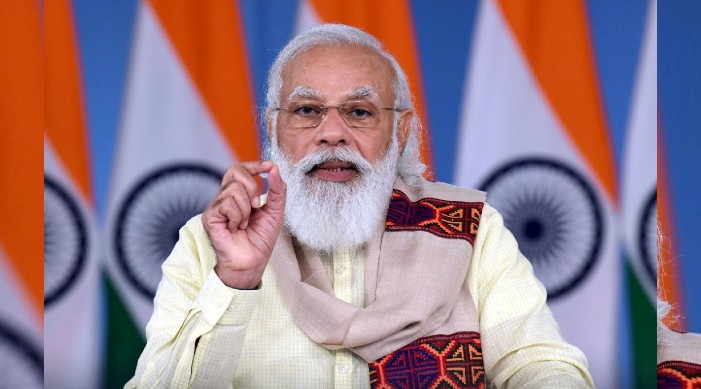 The success of vaccination in India is the result of the spirit and hard work of its citizens, PM Modi said

Prime Minister Narendra Modi has lauded health workers in Himachal Pradesh for making it the first state to have administered at least one dose of Covid-19 vaccine to its entire eligible population.

He said Himachal Pradesh is proof of how the country's rural society is empowering the world's largest and fastest vaccination campaign.

The Prime Minister was interacting with healthcare workers and beneficiaries of the COVID vaccination program in Himachal Pradesh via video conference.

Addressing the gathering, the Prime Minister said Himachal Pradesh has emerged as a champion in the fight against the largest epidemic in 100 years.

PM Modi said that the success of vaccination in India is the result of the spirit and hard work of its citizens.

“India is vaccinating at the record speed of 1.25 crore vaccines per day. This means that the number of vaccinations in India in one day is more than the population of many countries,” he said.

PM Modi’s personal and informal chord during the interaction

PM Modi struck a very personal and informal chord during the interaction.

The Prime Minister praised the Covid workers of Himachal for minimizing the vaccine wastage and discussed their experience about serving in a difficult area.

The Prime Minister praised the team efforts of the Himachal Pradesh team.

PM Modi also talked with ASHA workers and inquired about their experience with the vaccination drive.

Karmo Devi ji of Una has the distinction of vaccinating 22500 people. The Prime Minister praised her spirit as she kept on working despite a fracture in her leg. The Prime Minister said that the world’s biggest vaccination programme is continuing due to the efforts of people like Karmo Devi.

PM Modi further discussed the senior citizens' experience who thanked the Prime Minister for the sufficient supply of vaccine and blessed the campaign. The Prime Minister praised the health schemes running in Himachal.

PM Modi expressed happiness that even in a remote district like Lahaul-Spiti, Himachal has been a leader in giving 100 percent first dose. This is the area which used to be cut off from the rest of the country for months before the Atal Tunnel was built.

He praised the people of Himachal Pradesh for not allowing any rumour or disinformation to hamper the vaccination efforts. He added that Himachal is proof of how the country's rural society is empowering the world's largest and fastest vaccination campaign.

PM Modi said that tourism is also getting the direct benefit of strengthened connectivity, farmers and gardeners who produce fruits and vegetables are also getting it. ‘By using internet connectivity in villages, young talents of Himachal can take their culture and new possibilities of tourism to the country and abroad,’ he said.

Referring to the recently notified Drones Rules, the Prime Minister said these rules will help in the spheres of many sectors like health and agriculture. This will open doors for new possibilities, said the Prime Minister.

Referring to another of his Independence Day announcements, he said the central government is now going to create a special online platform for women self-help groups.

On the eve of Azadi ka Amrit Mahotsav, the Prime Minister urged the farmers and gardeners of Himachal to make farming in Himachal Pradesh organic within the next 25 years.