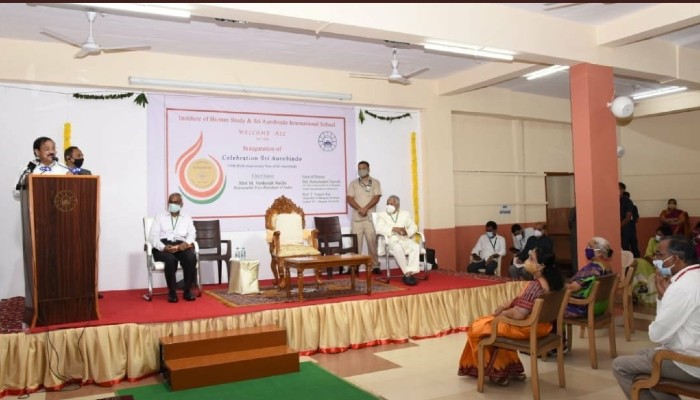 If everyone follows one’s religion in true spirit, there will not be any religious conflict, the Vice President said

Vice President M Venkaiah Naidu has called upon the people to fight against divisive forces that seek to divide society on the lines of religion, region, language, caste, creed or colour.

In the 75th year of our independence, every Indian must take a pledge to further strengthen unity and harmony in our hugely diverse society, he said on Saturday.

Emphasizing that bridging all divisions was necessary for the greatness of India’s future, he highlighted the positive aspects of religion and said that if everyone follows one’s religion in true spirit, there will not be any religious conflict.

Education not just for employment but for enlightenment

The Vice President said that the goal of education should not be limited to building careers for earning a livelihood but it should aim to build sons for the Motherland to work and to suffer for her.

He underlined that it is the sacred duty of teachers to ensure that their students imbibe noble spiritual ideals of our ancient Indian wisdom and take pride in Indian culture.

Stressing that education is not just for employment but for enlightenment, the Vice President called for making India a Vishwa Guru again. “India should become Vishwa Guru not to dominate the world but to give knowledge and to spread light,” he said.

The Vice President also called for rewriting Indian history with an Indian perspective to instil a sense of pride in our glorious cultural heritage among the younger generation.

Reiterating Sri Aurobindo’s vision for India’s spirituality, VP Naidu said that a reawakening needs to come about in terms of India’s rich legacy of spiritual wisdom which would need to be recast into new forms and expressions to make it globally relevant and in keeping with the contemporary times.

He termed spirituality as the master key of India’s great culture and called for rediscovering its greatness by reliving it in our daily life.

“The entire mankind needs to realise that what is required today is not mere physical wealth but spiritual wealth as well,” he said.

Reforms needed in the United Nations

Responding to a question by a student, VP Naidu said reforms were needed in the United Nations so that it becomes a truly representative organisation where the soul and heart of the nations come together, Vice President M Venkaiah Naidu has said.

He expressed disapproval of some nation’s mentality to consider themselves as superior to others.

He said that equal respect for all is a prerequisite to bring unity of mankind. “Separate identities are going to be there but these identities should not divide us,” he said.