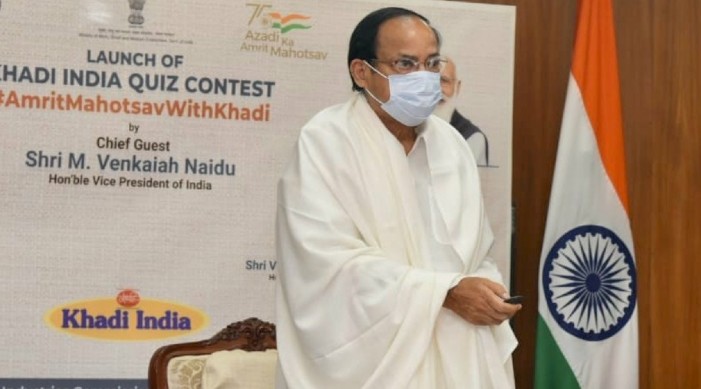 Due to its porous texture, Khadi is eminently suitable for our local climatic conditions, Venkaiah Naidu said

Appealing to the citizens to treat khadi as India's 'National Fabric', Vice President Venkaiah Naidu on Tuesday called upon celebrities from various fields to come forward and promote its use in a big way.

Speaking at the launch of the 'Khadi India Quiz Contest', he said this would give students an opportunity to experience the many benefits of Khadi and also help them connect with our great freedom fighters and freedom movement.

"Due to its porous texture, Khadi is eminently suitable for our local climatic conditions," he added. He appealed to the youth to make Khadi a fashion statement and promote its use among everyone with passion.

He talked of how Mahatma Gandhi started the Khadi movement 1918 to generate a source of income for the poverty-stricken masses. It later turned it into a powerful symbolic tool against foreign rule, Vice President Naidu pointed out.

Describing India’s freedom struggle as a saga of bravery, resilience and devout patriotism, the Vice President mentioned how the Father of the Nation, Mahatma Gandhi galvanized the masses across the length and breadth of the country in the fight against colonial rule.

Observing that men and women from all sections and all hues participated in the freedom struggle, he said “It indeed was an unparalleled phenomenon in the annals of human history”.

India's freedom struggle was a journey of resilience and hope “which inspires us to keep moving no matter how adverse the situation gets,” VP Naidu said.

Vice President Naidu expressed his happiness over the phenomenal turnaround of Khadi in the last seven years.

"I am happy to note that KVIC has succeeded in establishing a pan-India reach and has connected people with sustainable self-employment activities even in the remotest corners of the country," he said.

The Khadi India Quiz Contest has been organized by the Khadi and Village Industries Commission (KVIC) as part of 'Azadi ka Amrit Mahotsav'.

Urging everyone to take part in the contest, the Vice President said it was an interesting way of taking us back to our roots as it recollects the historic moments of our freedom struggle and the unparalleled contribution of our great freedom fighters.