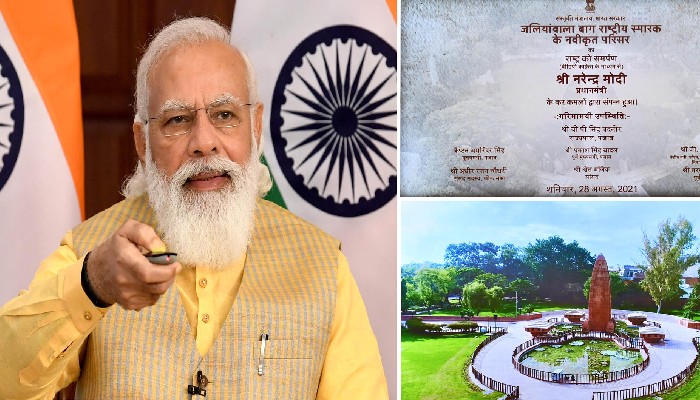 Jallianwala Bagh is the place which inspired countless revolutionaries and fighters, said the Prime Minister

Prime Minister Narendra Modi on Saturday dedicated the renovated complex of Jallianwala Bagh Smarak at Amritsar to the nation through video conference.

During the event, he also inaugurated the Museum Galleries at the Smarak. The event showcased the multiple development initiatives taken by the government to upgrade the complex.

The Prime Minister bowed to the brave land of Punjab and to the holy soil of Jallianwala Bagh. He also saluted those children of Mother Bharati who were subjected to unprecedented inhumanity just to extinguish the flame of freedom.

Addressing the gathering, the Prime Minister said the dreams of the innocent boys and girls, of the sisters and brothers are still visible in the bullet marks in the walls of Jallianwala Bagh.

He added, “Today, we are remembering the love and lives of countless mothers and sisters which were snatched away in that Shaheedi well.”

The Prime Minister remarked that Jallianwala Bagh is the place which inspired countless revolutionaries and fighters like Sardar Udham Singh, Sardar Bhagat Singh to die for the freedom of India. He added that those 10 minutes of April 13, 1919, became the immortal story of our freedom struggle, due to which we are able to celebrate the AmritMahotsav of freedom today.

On such an occasion, dedication of Jallianwala Bagh Memorial in the modern version in the 75 year of independence, is an opportunity of great inspiration for all of us, he said.

The Prime Minister remembered that before the Jallianwala Bagh Massacre, fairs of holy Baisakhi used to be held in this place. Guru Gobind Singh Ji Khalsa Panth with the spirit of 'Sarbat da Bhala' was also founded on the same day.

He said on the 75th year of our Independence, this renovated Jallianwala Bagh will remind the new generation about the history of this holy place and will inspire to learn a lot about its past.

The Prime Minister noted that it is the responsibility of every nation to preserve its history as it teaches us and gives us the direction to move forward.

He added that it is not right for any country to ignore such horrors of its past. Therefore, he said, that India has decided to observe 14th August every year as 'Partition Horrors Remembrance Day'. India witnessed horrors like Jallianwala Bagh during the partition of India.

He said that people of Punjab have been the biggest victims of Partition. He added that we still feel the pain of what happened at the time of Partition in every corner of India and especially in the families of Punjab.

The Prime Minister said today, if Indians are in trouble, anywhere in the world, then India stands up to help them with all its might. Be it the Corona period or the crisis of Afghanistan, the world has experienced it continuously.

He added that hundreds of friends from Afghanistan are being brought to India under Operation Devi Shakti. The Prime Minister said due to ‘Guru Kripa’ the government could bring ‘swaroop’ of holy Guru Granth Sahib along with people to India.

He said that teachings of Gurus help in preparing policies for people suffering from such circumstances.

The Prime Minister said that current global conditions underline the importance of ‘Ek Bharat Shreshtha Bharat’ and underscore the need for Aatm Nirbharta and Aatm vishwas. These incidents goad us to strengthen the foundations of the country, he said.

The Prime Minister said today in Amrit Mahotsav, freedom fighters are being commemorated in every village and are being honored.

He said that efforts are made to preserve the places associated with the important stages of the freedom struggle and with national heroes and bring them to the fore. He mentioned, like Jallianwala Bagh, national monuments being renovated across the country such as Interactive Gallery in Allahabad Museum, Biplobi Bharat Gallery in Kolkata, etc.

Contributions of Azad Hind Fauz (INA) have been brought to forefront by giving new identity to the place in Andaman where Netaji unfurled the national flag for the first time. Names of Islands in Andaman have been dedicated to the freedom struggle.

The Prime Minister said our tribal community contributed greatly and made great sacrifices for freedom. The Prime Minister lamented the fact that their contribution did not get as much place in the history books as it should have. He informed that work is currently underway on museums showing tribal freedom fighters and their struggle in 9 states of the country.

The Prime Minister remarked that the country aspired for national memorial for our soldiers who made the supreme sacrifice.

He expressed satisfaction that the National War Memorial is instilling in today's youth the spirit of protecting the nation and sacrificing everything for the country.

Underlining the brave tradition of Punjab, the Prime Minister said that, following the path of Gurus, sons and daughters of Punjab stand fearlessly against all dangers facing the country.

The Prime Minister remarked that this Amrit Kaal of our Independence is very important for the whole country. In this Amrit Kaal, he urged everyone to carry forward both heritage and development.

He said the land of Punjab has always inspired us and today it is necessary that Punjab makes progress at every level and in every direction. For this he urged everyone to work together with the spirit of 'SabkaSaath, SabkaVikas’. He wished this land of Jallianwala Bagh to continue to give continuous energy for the resolutions to make the country fulfill its goals soon.