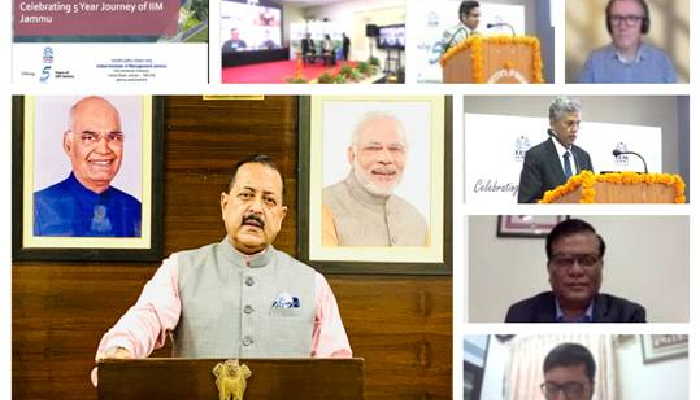 Minister Jitendra Singh speaking at a function to mark the 5-Year Journey of IIM, Jammu on August 22.

Besides several centrally funded medical, engineering and ayurvedic colleges, Jammu boasts of over a half dozen India’s premier institutes

This was stated by Union Minister of State (Independent Charge) Science and Technology Dr Jitendra Singh at a function to mark the 5-Year Journey of IIM, Jammu on Sunday.

Moreover, other centrally funded institutes like over half a dozen Government Medical Colleges, RUSA funded Engineering colleges, Ayurvedic college, an upcoming Homeopathic College and a chain of KendriyaVidyalayas in the Jammu province is a reality today, he added.

Dr Jitendra Singh said that Jammu will soon witness huge industrial investment to the tune of Rs 25,000 crore and mostly in the health sector thus opening a large number of employment opportunities for youth in the area and also for IIM students. He, however, urged them to become job providers, rather than job seekers through innovative start-up ventures.

“We have to come out of the entrenched mind-set of getting government jobs for all, which is neither feasible nor desirable anywhere in the world,” the Union Minister said.

Dr.Jitendra Singh further said that with the historical constitutional changes happened after August 5, 2019 and the barriers of academic growth done away with, the best faculty from different fields from all over India are ready to come to Jammu and Kashmir to serve with dedication as the previous apprehensions have gone now with the new order of law coming into existence.

He noted with satisfaction that beginning from a batch of 54 students in 2016, IIM, Jammu today has more than 250 students and 30 eminent faculty including six international adjunct professors.

The Minister also complimented the faculty and students for getting a beautiful complex at Jagati by 2022 with all modern facilities at par with best such institutes in India.