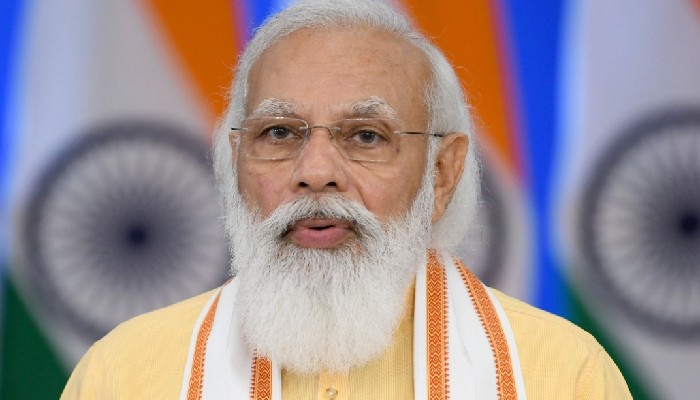 The world is apprehensive of ideologies like those held by the attackers of Gujarat's Somnath Temple, he said

The destructive powers and the thinking that tries to establish an empire on the basis of terror may dominate temporarily, but its existence is never permanent, Prime Minister Narendra Modi has said.

Such powers and thinking cannot suppress humanity for a long time, he said while inaugurating and laying the foundation stone of multiple projects in Somnath, Gujarat on Friday.

"This was true when some attackers were demolishing Somnath, it is equally true even today, when the world is apprehensive of such ideologies," he said.

While there was no direct reference to Afghanistan, the significance of the statement could not be missed, coming as it did days after the Taliban wrested control of the war-torn nation.

Reflecting on the history of the revered Somnath temple, the Prime Minister recalled the repeated destruction of the temple and how the temple rose after every attack.

The projects inaugurated by PM Modi include the Somnath Promenade has been developed under PRASHAD (Pilgrimage Rejuvenation and Spiritual, Heritage Augmentation Drive) Scheme at a total cost of over ₹ 47 crore.

The Somnath Exhibition Centre, developed in the premises of ‘Tourist Facilitation Centre’, displays the exhibits from dismantled parts of old Somnath temple and its sculptures having Nagar style temple architecture of old Somnath.

The reconstructed temple precinct of Old (Juna) Somnath has been completed by Shree Somnath Trust with a total outlay of ₹ 3.5 crore.

This temple is also referred to as Ahilyabai Temple since it was built by Queen Ahilyabai of Indore, when she found that the old temple was in ruins. The entire old temple complex has been holistically redeveloped for the safety of pilgrims and with augmented capacity.

Shree Parvati Temple is proposed to be constructed with a total outlay of ₹ 30 Cr. This will include temple construction in Sompura Salats Style, development of Garbha Griha and Nritya Mandap.

The Prime Minister said that our thinking should be to learn from history to improve our present and create a new future.

Referring to his mantra of ‘Bharat Jodo Andolan’, PM Modi said that this is not just geographical connectivity but connect in thoughts also. ‘This also is a pledge for connecting the building of future India with our past’, said the Prime Minister.

The Prime Minister said, “For us essence of history and faith is Sabka Saath, Sabka Vikas, Sabka Vishwas and SabkaPrayas”.

Prime Minister Modi highlighted the role of the faith and belief system in underscoring the unity of India.

From Somnath and Nageshwar in the west to Vaidyanathin the east, from Baba Kedarnath in the north to Shri Rameshwar, at the extreme southern end of India, these 12 Jyotirlingas serve to connect the whole of India, he pointed out.

Similarly, PM Modi added, the arrangement of our four dhams, the concept of our Shaktipeeths, the establishment of different pilgrimages in different corners of our country, this outline of our faith is actually an expression of the spirit of 'Ek Bharat, Shreshtha Bharat'.’

Continuing with the role of spirituality in strengthening the unity of the nation, the Prime Minister dwelled upon the national and international potential of tourism and spiritual tourism.

He said that the country is reviving the ancient glory by building modern infrastructure.

He gave the example of the Ramayana circuit which is apprising the Ram Bhakts about new places related to lord Ram and making them feel how Lord Ram is entire India’s Ram. Similarly, the Buddha Circuit providing facilities to the devotees from world over.