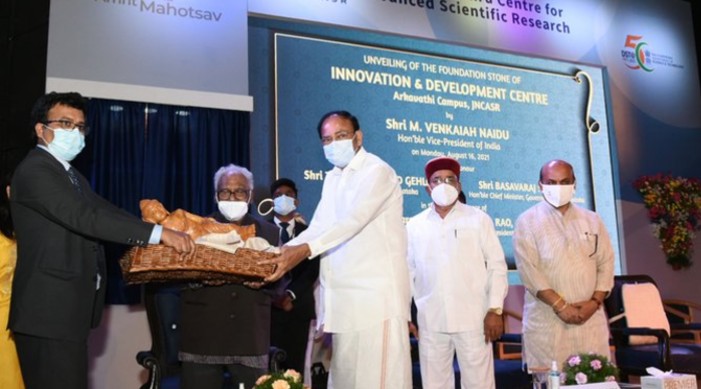 Science is the backbone for the progress and technological advancement of any country, said the Vice President

Vice President M Venkaiah Naidu on Monday called upon scientists to come up with out-of-the-box solutions to address challenges faced by mankind from climate change to agriculture to health and medicine.

Addressing scientists and students at the Jawaharlal Nehru Centre for Advanced Scientific Research (JNCASR) at Bengaluru, the Vice President urged scientists to strive for achieving excellence and to innovate for improving the lives of the people. “Purpose of science is to make people’s lives happy, healthy and comfortable”, he reiterated.

Stressing that scientific research should be relevant to society, he said, in this context, translational research assumes importance. He lauded JNCASR for having generated over 300 patents and for promoting the establishment of a few startups based on indigenous inventions.

While noting that JNCASR was known for conducting research in a wide range of areas, he advised the scientists and researchers to undertake research in new emerging fields like synthetic biology, computational biology, high-performance engineering materials and artificial intelligence. Terming agriculture as ‘basic culture of the country’, the Vice President also wanted the scientists to focus their attention on issues faced by the farming community.

Observing that science is the backbone for the progress and technological advancement of any country, the Vice President referred to India’s huge demographic dividend and said the need of the hour is to inculcate scientific temper from a young age and to promote world-class scientific research that addresses societal problems.

Lauding JNCASR for having made an excellent impact on the international arena by positioning itself among the top institutions in its areas of expertise, he said it can contribute immensely towards fostering scientific temper in the country and improving research outcomes.

Referring to the National Education Policy 2020, he said it will ensure that students have access to new teaching and learning strategies across all segments. ‘This will create the right educational ecosystem and enrich their knowledge base while also honing their skill sets”, he added.

The Vice President told the students to leave no stone unturned to achieve their goals. “Please remember that there is no substitute for hard work. You must always strive to push the boundaries and never remain content or complacent with the status quo”, he advised.

Mentioning that Bengaluru is blessed with a large number of water bodies, Naidu noted with concern that many of these water bodies are getting degraded because of people’s neglect or illegal encroachments.

He called for making all out efforts for regeneration and conservation of water bodies in Bengaluru and beyond.

Expressing his happiness over the fact that 40 % of JNCASR students are girls, the Vice President said that he wished to see similar healthy trend in other scientific institutions as well.

Congratulating eminent scientist, Prof. C N R Rao, who was nominated to the prestigious International Eni Award, 2020, he complimented him for continuing to inspire young scientists not only in India but all over the globe.

The Governor of Karnataka Thaawarchand Gehlot, Chief Minister of Karnataka Basavaraj Bommai, Karnataka Minister of Higher Education, IT, Science & Technology and Skill Development, CN Ashwath Narayana, eminent scientist, Prof. CNR Rao and President of JNCASR, Prof. G. U. Kulkarni were among those present on the occasion.