Nothing can stop India from realizing its dreams in the 21st century: PM Modi 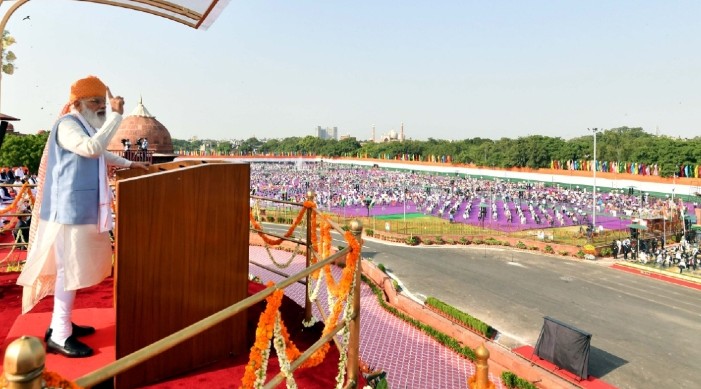 Nothing can stop India's dreams and aspirations from being fulfilled in the 21st century, Prime Minister Narendra Modi said in his Independence Day address on Sunday.

According to PM Modi, "Our actions today will determine our future. Our today will set the theme of our 100 years of India's Independence".

PM Modi expressed his full faith in the youth of the country, saying this was a "can do generation" which could achieve every goal.

'This is India's precious time'

PM Modi recited a Hindi poem to sum up the thoughts he shared during his address, the first few lines of which went:

The above Iines, loosely translated into English, mean:

"This is the time, the right time, India's precious time..."

During his address, Prime Minister Modi came up with a new mantra (slogan).

PM Modi's tribute to those who built a strong India

PM Modi expressed his deep gratitude to everybody who had contributed towards building a strong and prosperous India.

In this context, he referred to Mahatma Gandhi, Netaji Subhash Chandra Bose, great revolutionaries like Bhagat Singh, Chandrasekhar Azad, Bismil and Ashfaqulla Khan; Rani of Jhansi Lakshmibai, Queen Chennamma of Kittur or Rani Gaidinliu or the valour of MatanginiHazra; the country's first Prime Minister Pandit Nehru, and Sardar Vallabhbhai Patel, who integrated the country into a united nation.

"The country is indebted to all these great personalities, he said.

"India marks Amrit Mahotsav with a sense of gratitude to those who toiled for freedom and with a commitment to build a strong and prosperous India.

During the speech, the Prime Minister also lauded India’s Olympic contingent, frontline and healthcare workers and Covid warriors, and paid tribute to former leaders of the country.

Lauding the 2020 Olympic contingent, the PM said, “The athletes who have made us proud at Tokyo Olympics are here amongst us today. I urge the nation to applaud their achievement today. They have not only won our hearts but also inspired future generations.”