India's comprehensive war against Covid-19 appreciated by WHO Chief Scientist 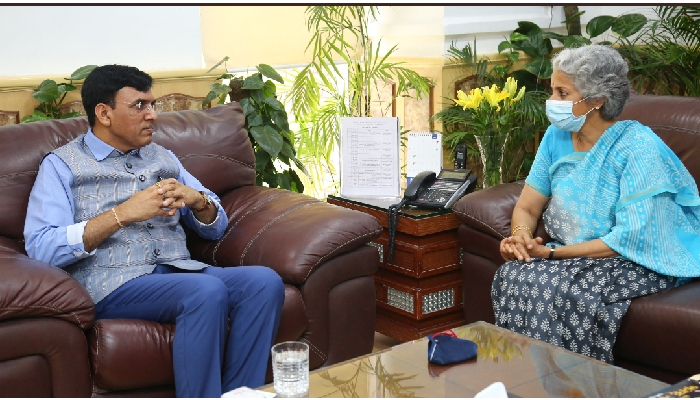 She met Union Health Minister Mansukh Mandaviya on Thursday to discuss a wide range of issues, including WHO's approval of Covaxin, the indigenous vaccine produced by Hyderabad-based Bharat Biotech.

"Held a meeting with Dr Soumya Swaminathan, Chief Scientist of @WHO

We had a productive discussion on WHO’s approval of @BharatBiotech’s COVAXIN.

@DoctorSoumya also appreciated India’s efforts for the containment of #COVID19," Mandaviya tweeted after the meeting.

The WHO Chief Scientist also met Union Minister of State for Science and Technology Jitendra Singh.

Appreciating India’s comprehensive and cohesive war against Corona, Swaminathan said there will be a need to stand on guard in the months to come as well.

According to an official release, she emphasised on the importance of mass vaccination through easy availability and accessibility.

Vaccines can certainly reduce the risk of death and infections, even though they may not be able to provide absolute protection against different variants of the virus, she pointed out.

Singh, in the other hand, briefed her on the progress of the fastest and the largest vaccination drive taken up by India.

India was in a position to dispense more than one vaccine within one year despite the constraints of resources, he pointed out.