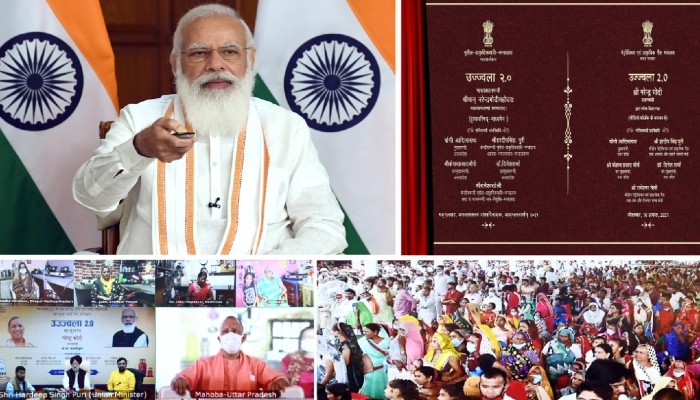 The Pradhan Mantri Ujjwala Yojana 2.0, which will provide 1 crore LPG connections to low income families including migrant workers, has been launched by Prime Minister Narendra Modi.

PM Modi handed over LPG connections to women beneficiaries in Mahoba on Tuesday during a virtual event.

Along with a deposit-free LPG connection, Ujjwala 2.0 will provide the first refill and a hotplate free of cost for the beneficiaries of the scheme. Also, the enrollment procedure will require minimal paperwork.

Moreover, in Ujjwala 2.0, migrants will not be required to submit ration cards or address proof. A self-declaration for both ‘family declaration’ and ‘proof of address’ will suffice.

During the event, PM Modi noted that the resolve of health, convenience and empowerment of sisters has received great impetus from Ujjwala Yojana.

In the first phase of the scheme, 8 crore poor, dalit, deprived, backward and tribal families were given free gas connections.
He said the benefit of this free gas connection was felt in the era of the Corona pandemic. Ujjawala Yojana has led to manifold expansion of LPG gas infrastructure.

During the last 6-7 years more than 11 thousand LPG distribution centres have been opened. In UP, the number of these centres increased to 4 thousand from 2 thousand in 2014.

The Prime Minister said that we are very near the cent percent gas coverage as during the last 7 years more gas connections have been given than were there in 2014.

Many, he continued, from all over UP and other states including Bundelkhand, migrated from village to city or to other states for work. There they face the problem of address proof. He said that Ujjwala 2.0 scheme will give maximum benefit to lakhs of such families.

He added that now these workers from other places need not run from pillar to post for address proof. He said the government has full faith in the honesty of the migrant workers. All one has to do is give a self-declaration of the address for getting a gas connection.

The Prime Minister also said that efforts are on to provide gas through pipes at a much larger scale. He said PNG is much cheaper than cylinder and work is on to provide PNG in many districts of eastern India including in UP. In the first phase, a target has been to connect 12 lakh households in more than 50 districts of UP.

Many ethanol and biofuel related units were established in the state. Process for establishing units for making compressed biogas from sugarcane waste, CBG plants is going on in 70 districts of the state. Plants are coming up in Budaun and Gorakhpur for making biofuel from ‘parali’.

The Prime Minister said now the country is moving towards fulfilling the dream of a better life, from the fulfillment of basic amenities. We have to increase this potential manifold in the coming 25 years. Together we have to prove this resolve of a capable India. Sisters are going to have a special role in this.

At the launch, CM Adityanath said, “During Covid, PM Modi provided all the beneficiaries with free cylinders for 6 months. Before 2014, many people didn't have LPG connections while those who had, would not get the cylinders.”