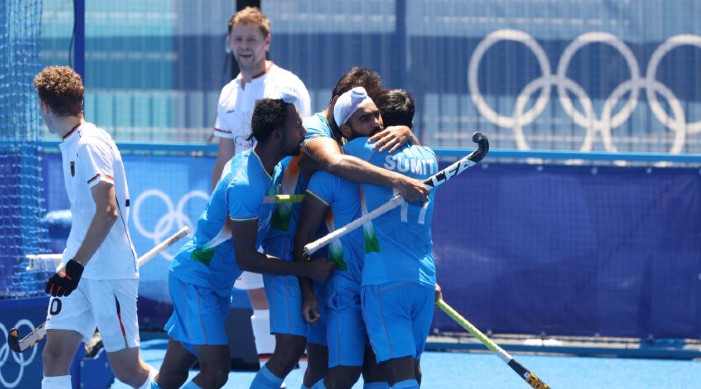 Congratulating the Indian hockey team, PM Modi said with this feat, “they have captured the imagination of the entire nation”

Ending a 41-year wait for an Olympic medal in hockey, Indian men's team defeated Germany 5-4 in the bronze medal match at the Tokyo Olympics 2020 on Thursday. The last time India had won a medal in hockey was at the 1980 Moscow Games where they got the gold.

Prime Minister Narendra Modi congratulated the Indian Men's Hockey Team for winning the Bronze Medal at Tokyo Olympics 2020. The Prime Minister also said that with this feat, they have captured the imagination of the entire nation, especially our youth.

In a tweet, the Prime Minister said, "Historic! A day that will be etched in the memory of every Indian. Congratulations to our Men’s Hockey Team for bringing home the Bronze. With this feat, they have captured the imagination of the entire nation, especially our youth. India is proud of our Hockey team."

In an enthralling game between the two teams that went right down to the middle, India came back twice from behind to level the scores and then take lead in the match.

India’s tally of five goals were scored by Simranjeet Singh (17', 34'), Hardik Singh (27'), Harmanpreet Singh (29') and Rupinder Pal Singh (31'). Goalkeeper PR Sreejesh came up with some outstanding saves in the dying seconds of a historic win at the Olympic Games Tokyo 2020.

Playing their heart out to bring joy to the entire nation, the Indian Men's Hockey Team scripted India’s resurgence in global hockey.

Earlier, India men's hockey team had a great run at the Tokyo Olympics, defeating New Zealand 3-2 in their opening group game, and then picking up wins over Germany (2-0), Spain (3-1), Argentina (3-1), and Japan (5-3) in their group matches.

Barring the 7-1 defeat against Australia, and the 5-2 loss in the semifinal to the World Champions Belgium, India won all their games in Tokyo Olympics 2020.

Thursday’s win by the men's hockey team takes India's tally of medals in Tokyo so far to four and (fifth) confirmed.

Meanwhile, wrestler Ravi Kumar Dahiya has also confirmed a medal and will compete for a gold medal on Thursday afternoon.