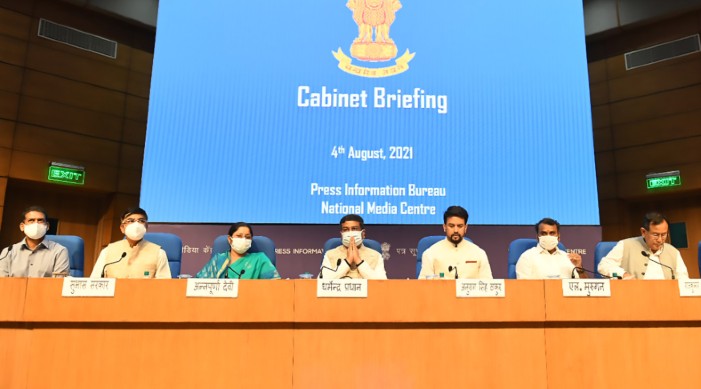 The Union Cabinet chaired by Prime Minister Narendra Modi on Wednesday approved the continuation of 1023 Fast Track Special Court (FTSCs) including 389 exclusive POCSO Courts as a Centrally Sponsored Scheme (CSS) from April 1, 2021 to March 31, 2023 with an outlay of Rs. 1572.86 crore (Rs.971.70 crore as Central share and Rs.601.16 crore as State share).

Central share will be funded from Nirbhaya Fund, which was launched on October 2, 2019.

The Government has always given paramount importance to the safety and security of women and children.

Towards empowering the girl child, the Government has already launched several programmes, including ‘BetiBachaoBetiPadhao. Incidents of rape of minor girls below the age of twelve years and women below the age of sixteen years have shaken the conscience of the entire nation.

The occurrence of such incidents and prolonged trials of convicts had necessitated the creation of a dedicated court machinery which could expedite trials and provide immediate relief to the victims of sexual offences.

To bring more stringentprovisions and expeditious trial and disposal of such cases, the Central Government enacted “The Criminal Law (Amendment) Act, 2018” and made provision of stringent punishment including death penalty for perpetrators of rape. This led to the establishment of the Fast Track Special Courts (FTSCs).

Fast Track Special Courts are dedicated courts expected to ensure swift dispensation of justice. They have a better clearance rate as compared to the regular courts and hold speedy trials.

Besides providing quick justice to the hapless victims, it strengthens the deterrence framework for sexual offenders.

Currently covering 28 states, it is proposed to be expanded to cover all 31 states which are eligible to join the Scheme.

It is supporting the efforts of State/UT Governments for providing time bound justice to hapless victims of sexual offences in the country including the remote and far - flung areas.

The expected outcomes of the scheme are as follows:

Further the commitment of the nation to champion the cause of safety and security of women and girl child.

Reduce the number of pending cases of Rape & POCSO Act.

Provide speedy access to justice to the victims of sexual crimes and act as a deterrent for sexual offenders.