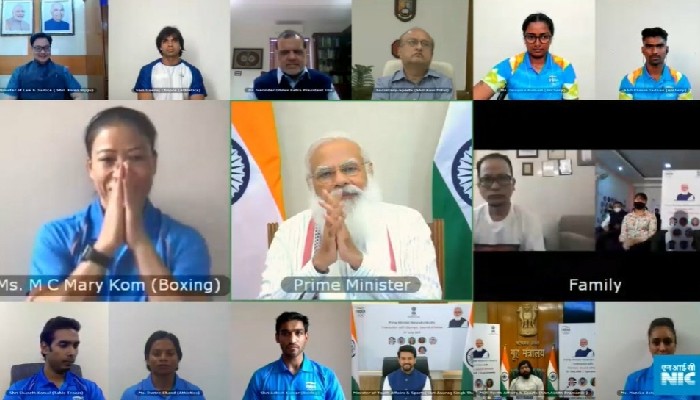 Prime Minister Narendra Modi interacted with the Indian athletes representing the country in Tokyo Olympics 2020 in order to motivate them ahead of their participation at the games.

The Prime Minister started the conversation, organised on Tuesday, by speaking with archers Deepika Kumari and Pravin Jadhav. Both Deepika and Pravin told PM Modi about their struggles and how they were preparing for the Tokyo Olympics.

He then spoke to javelin thrower Neeraj Chopra who informed the prime minister about his recovery from a shoulder injury and also his experience of being part of the armed forces and his goal for the Tokyo Olympics.

The Prime Minister also spoke with sprinter Dutee Chand, who will represent the country in the 100 and 200 meter sprints. Chand spoke about the tough challenges that she faced while coming through the ranks. PM Modi told her that the entire country wants to see her grab a podium finish in Tokyo.

PM Modi asked boxer Ashish Kumar about his fight against Covid-19 and also about losing his father. The boxer shared his journey with the prime minister and narrated the ordeal that he faced when he tested positive for Covid-19 in Spain.

Champion boxer MC Mary Kom was the next athlete to interact with the Prime Minister. PM Modi told Mary Kom that she is an inspiration for the entire country and that her achievements have inspired several young boxers.

He then spoke with 2016 Rio Olympics silver medalist PV Sindhu and asked her how her practice at the Gachibowli Stadium was going on. Sindhu thanked the government for helping her get all the facilities to train for the upcoming Games.

The Prime Minister asked Elavenil Valarivan (Shooting) why she got interested in the sport. On a personal note, Modi talked to the shooter who was raised in Ahmedabad, in Gujarati and greeted her parents in Tamil and recalled her early years as he was MLA from her area Mani Nagar. He enquired how she balances both her studies and sports training.

PM Modi asked shooter Saurabh Chaudhary about whether he does any meditation or yoga to help him concentrate. Chaudhary, India's top medal contender informed the prime minister about his routine and also asked him about how he manages to keep calm while handling matters related to the country.

Veteran Olympian Sharath Kamal, who will represent India in table tennis, was asked by the PM to share his experience with young athletes. The paddler told the athletes to give utmost importance to Covid-19 norms and protect themselves.

Kamal went on to speak about how the scene has changed in India for professional sport and the kind of importance all sporting disciplines get in the country.

The Prime Minister then went on to speak to female table tennis player Manika Batra, and congratulated her for teaching the sport to underprivileged kids. PM Modi also asked the young paddler about her interest in dancing and how she uses it as a stress buster.

India's top female wrestler Vinesh Phogat spoke to the PM next about carrying forward the legacy of the Phogat family and how she battled past the career-threatening injury that saw her limp out of the 2016 Rio Olympics.

PM Modi spoke with swimmer Sajan Prakash, who became the first Indian swimmer to qualify for the Olympic Games after clearing the 'A' standard of international swimming, clocking 1:56.38 minutes in the 200m butterfly.

The Prime Minister next spoke with Indian men's hockey team captain Manpreet Singh and asked him about the team sticking together during Covid. PM Modi asked if the team faces any extra pressure due to the country's elite record in the Games in hockey.

Singh told the prime minister that the Olympic record serves as an inspiration and does not add any extra pressure.

Ace tennis player Sania Mirza was the next in line. PM Modi asked Mirza about the rise of the sport in second and third tier cities. Mirza said that there are a lot of opportunities in the sport as compared to when she picked up a racket. PM asked Mirza about her partnership with Ankita Raina as well.

Mirza told the PM that the country's belief in Olympic sports changed ever since India hosted the Commonwealth Games in 2010.

PM Modi said that he would have loved to invite all the athletes to his house in Delhi but due to Covid he has had to interact with everyone virtually. He lauded the athletes for their hard work in these tough times and asked the country to cheer for the Indian contingent at the Tokyo Olympics.

While addressing the Indian athletes, the Prime Minister regretted the fact that he could not host the athletes due to the pandemic. He remarked that the pandemic has changed their practice and even the year of the Olympics.

He recalled his Mann ki Baat address when he exhorted the citizens to cheer for their sportspersons in the Olympics. The Prime Minister noted the popularity of the #Cheer4India. He said that the whole country is behind them and the blessings of all the countrymen are with them.

PM Modi informed that people can login to the NaMo app and cheer for their sportspersons where special provisions have been made for the purpose. “These wishes of 135 crore Indians are the blessings of the country for all of you before entering the field of sports,” said the Prime Minister.

The Prime Minister noted common traits among the athletes i.e. Bold, Confident and Positive. He said that all the athletes have common factors of Discipline, Dedication and Determination. PM Modi noted both commitment and competitiveness in the sportspersons. The same qualities are found in New India. “Athletes reflect the New India and symbolizes the nation's future,” he said.

He said all the athletes are a witness to how the country is standing with each of its players today with a new thinking and a new approach. Today your motivation is important for the country. He said that top priority has been given for the athletes to play freely, with their full potential and improve their game and technique.

The Prime Minister noted the changes that have been brought in the recent years to support the sportspersons. He said that efforts were made for the players to have better training camps and better equipment. Today, more international exposure is also being provided to the players. He said that so many changes have happened in such a short time since sports related institutions have given priority to suggestions by the sportspersons.

The Prime Minister said that seeing the confidence and energy of young India, he is optimistic that the day is not far when only victory will become New India’s habit. He advised players to give their best and asked the countrymen to “Cheer4India”.

During the interaction, Thakur thanked every official including coaching staff and support staff for doing hard work with our athletes. "The Sports Ministry hasn't left any stone unturned to support athletes. From TOPS to various other programs, we've supported our athletes," Thakur said.

Last week, the Prime Minister reviewed the preparations for facilitation of India's contingent at Tokyo. He had also discussed the inspirational journeys of some of the athletes on Mann Ki Baat, besides urging the nation to come forward and wholeheartedly support them.

A total of 126 athletes across 18 sports disciplines from India will be heading to Tokyo. This is the biggest-ever contingent India is sending to any Olympics.

The 69 cumulative events across the 18 sport disciplines that India will participate in is also the highest ever for the country. The games will begin on July 23.