In major reshuffle, Modi cabinet gets 43 ministers including 36 new faces 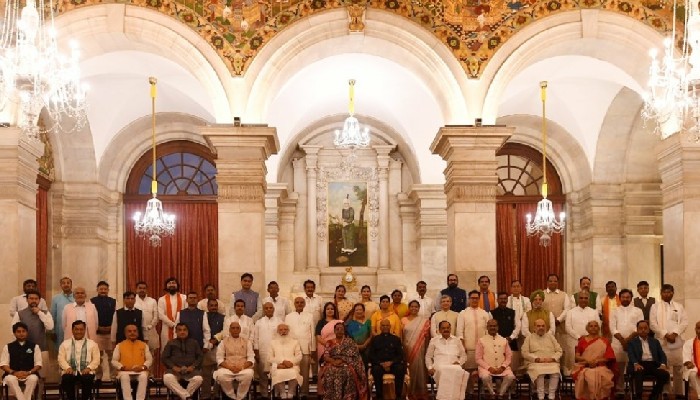 The ministers after taking oath at the Rashtrapati Bhawan.

In a major reshuffle of Prime Minister Narendra Modi's Cabinet, 43 members including 36 new faces were appointed to the Council of Ministers on Wednesday. They include 15 Ministers of Cabinet rank and 28 Ministers of State.

President Ram Nath Kovind administered the oath of office and secrecy to the members of the Council of Ministers at a ceremony held at the Rashtrapati Bhavan.

"I congratulate all the colleagues who have taken oath today and wish them the very best for their ministerial tenure. We will continue working to fulfil aspirations of the people and build a strong and prosperous India," said PM Modi on Twitter.

Earlier in the day, 12 members of the Council of Ministers, including Union Ministers Ravi Shankar Prasad and Hash Vardhan, submitted their resignations.

There are eight new faces in the Union Cabinet:

In addition to this, seven Ministers of State were elevated to Cabinet rank. They are:

The 28 new Ministers of State are:

Earlier in the day, 12 ministers, including six of Cabinet rank, had submitted their resignations. The 12 ministers who resigned from the Council of Ministers are:

Their resignations have been accepted by President Kovind, a communique issued by the President's Secretariat said.