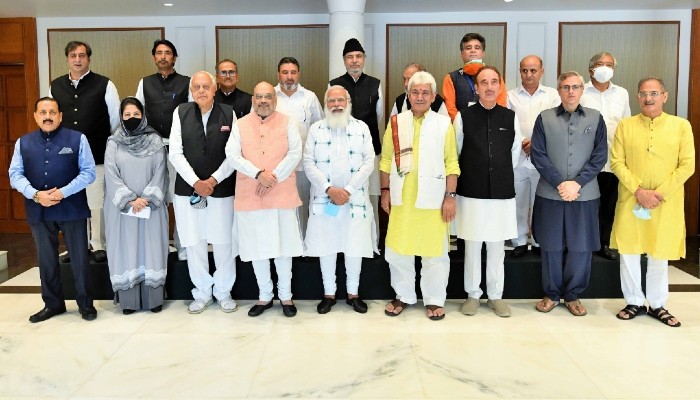 Pointing out that the government's priority is to strengthen grassroots democracy in Jammu & Kashmir, Prime Minister Narendra Modi has said that delimitation has to happen at a quick pace so that polls can take place.

This would help J&K get an elected government that gives strength to its development trajectory, he said after a meeting with leaders of political parties from the Union Territory in New Delhi on Thursday.

Discussing the development in a series of tweets, PM Modi said today’s meeting with political leaders from Jammu and Kashmir was an important step in the ongoing efforts towards a developed and progressive J&K, where all-round growth is furthered.

"Our democracy’s biggest strength is the ability to sit across a table and exchange views. I told the leaders of J&K that it is the people, specially the youth who have to provide political leadership to J&K, and ensure their aspirations are duly fulfilled," the Prime Minister said in another tweet.

The meeting was held in a cordial atmosphere, Minister of State in the Prime Minister's Office (PMO) Jitendra Singh said. "Everybody reaaffirmed their commitment to India's democracy and Constitution," he said in a video statement he posted on Twitter.

During the course of the meeting, Prime Minister Modi noted that elections had already been held for panchayats and other local bodies. He stressed the need for everybody to work together for the development of Jammu and Kashmir, Singh said.

This was the first meeting between leaders of major political parties in J&K and the central government after the abrogation of Article 370 and bifurcation of the erstwhile state into two Union Territories in August 2019.

More than a dozen political leaders, including four former Chief Ministers, attended the highly-anticipated all-party meeting that is being seen as a move to provide momentum to the political and electoral process in Jammu & Kashmir.

The PDP and NC are part of the People's Alliance for Gupkar Declaration (PAGD), an amalgamation of six political parties that is seeking restoration of statehood and special status for Jammu & Kashmir.